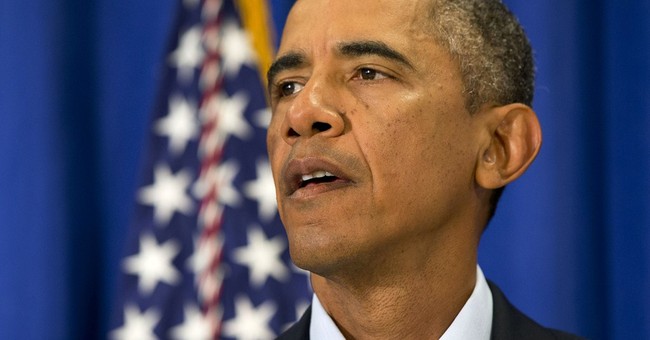 How intelligible is American foreign policy? Not very as Guy explained in his post yesterday: “During last summer's debate,” he wrote, “we were discussing strikes against the Assad regime. Today, we're talking about entering the country to defeat ISIS, which is intent on overthrowing the Assad regime and expanding its Islamist caliphate. The butcher we threatened to bomb last year now stands to benefit from our anti-ISIS campaign.”

This of course makes any discussion of expanding military airstrikes into Syria all the more complicated. On the one hand, if the president approves intervention, he could insulate and embolden Syrian President Bashar al-Assad even more -- a known despot. On the other hand, if we do nothing, ISIS’ dream of an Islamic caliphate stretching from Iraq’s northern border across all of Syria isn’t wholly out of the question. Neither of these outcomes, in other words, is particularly desirable.

For now, however, the New York Times confirmed yesterday that the president is slowly but surely inching towards military intervention:

President Obama has authorized surveillance flights over Syria, a precursor to potential airstrikes there, but a mounting concern for the White House is how to target the Sunni extremists without helping President Bashar al-Assad. Defense officials said Monday evening that the Pentagon was sending in manned and unmanned reconnaissance flights over Syria, using a combination of aircraft, including drones and possibly U2 spy planes. Mr. Obama approved the flights over the weekend, a senior administration official said.

The flights are a significant step toward direct American military action in Syria, an intervention that could alter the battlefield in the nation’s three-year civil war. Administration officials said the United States did not intend to notify the Assad government of the planned flights. Mr. Obama, who has repeatedly called for the ouster of Mr. Assad, is loath to be seen as aiding the Syrian government, even inadvertently.

But that doesn’t necessarily mean the president has made up his mind about what to do yet, either:

Mr. Obama met Monday with Secretary of Defense Chuck Hagel and other advisers to discuss options, but the White House said Mr. Obama had not yet decided whether to order military action in Syria. The White House made clear that if the president did act, he had no plans to collaborate with Mr. Assad or even inform him in advance of any operation.

“It is not the case that the enemy of my enemy is my friend,” said Benjamin J. Rhodes, a deputy national security adviser. “Joining forces with Assad would essentially permanently alienate the Sunni population in both Syria and Iraq, who are necessary to dislodging ISIL,” he said, using the group’s alternative name, the Islamic State in Iraq and the Levant.

Not surprisingly, this might be a bit of a problem (via The Guardian):

Syria has declared it is ready to help confront the rising threat from the Islamic State group but warned the US against carrying out air strikes on its territory without the consent of Damascus, saying any such attack would be considered an aggression. Walid al-Moallem, the Syrian foreign minister, said his government was ready “to co-operate and co-ordinate” with any side, including the US, or join any regional or international alliance against Isis. But he said any military action inside Syria should be co-ordinated with the Syrian government. “Any strike which is not co-ordinated with the government will be considered as aggression,” he said.

So, as far as I can tell, the current administration is only leaving themselves with two outs: (1) Do nothing militarily and risk more Syrian government losses to ISIS forces as they expand their caliphate. Or (2) conduct limited military airstrikes in the region unilaterally, thus possibly aiding Assad and fanning the flames of mistrust between Washington and Damascus.