House Republican: That VA "Fact Sheet" on Patient Deaths Isn't So Factual After All 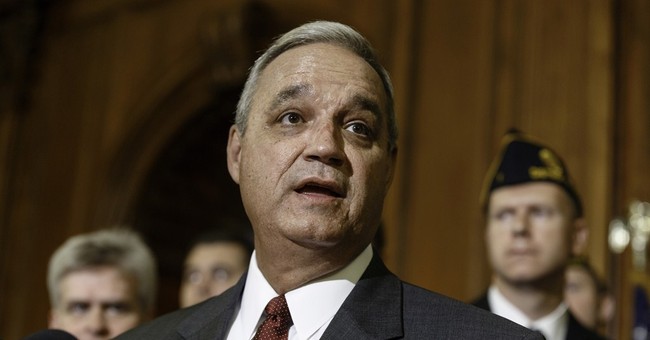 House Veterans Affairs Committee Chairman Jeff Miller recently sent a letter to VA Secretary Robert McDonald accusing the federal agency of lying to the public about the number of patient deaths at VA clinics and hospitals. Simply put, as recently as last April, a VA “fact sheet” was widely circulated (to the committee as well as to reporters) alleging that only 23 patients had died from lack of care since 1999. But newfound “documents” suggest that the total number of deaths may have, in fact, been much higher. CNN has the details:

The VA's "fact sheet" from April 7 confirms 76 patients were harmed as a result of delays in gastrointestinal care and "of these 76 patients, 23 have passed away," citing a "national review ...of all consults since 1999."

But more recent documents from the VA sent to Miller, a Florida Republican, show those deaths actually came from a much shorter period, from 2010 to 2012, which may indicate there could be more deaths because of delays than the VA has reported.

The article also notes that these highly suspect figures were regurgitated by none other than former VA Secretary Erin Shinseki as recently as last May. And since that time, Sen. Tom Coburn’s (R-OK) office has released their own internal and bombshell study concluding that perhaps “more than 1,000 veterans may have died as a result of VA malfeasance.” These revelations and independent reports, therefore, suggest that calculated steps were indeed taken, even after the scandal first broke, to "mislead Congress" and protect federal workers. This is why Chairman Miller is demanding both increased accountability and transparency from the new cabinet secretary:

In a statement to CNN, Miller said, "The VA scandal was created by selfish bureaucrats who lied in order to hide problems. Now it appears those involved in the creation of this fact sheet, including a number of folks who work in the department's central office headquarters, engaged in a similar sort of reprehensible behavior.

"This is further proof that VA's statistics -- and certain department employees -- simply cannot be trusted. If VA Secretary Robert McDonald can't offer a logical explanation for what happened, he needs to act quickly to hold those responsible for this misdirection accountable."

Did bureaucrats at the agency -- and the former department head -- willfully lie to Congress about patient deaths? That, it seems, is exactly what Chairman Miller is trying to find out.