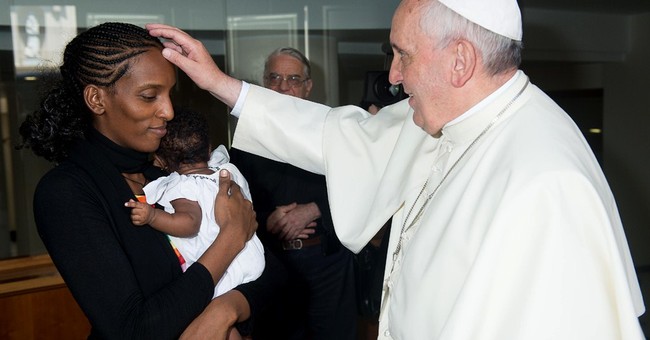 Sentenced to death for apostasy and confined to a prison cell for months (where she delivered her second child) Meriam Ibrahim fully expected to die a martyr's death. But now, it can be said, her harrowing experience is finally over.

To recap, she was initially granted a pardon and freed after Sudan’s government overturned her death sentence for apostasy when international lobbying efforts from humanitarian groups and Western governments proved successful, only to be detained at the airport for “falsifying” her travel documents. Her entire family was apprehended, too, and after some scary bumps in the road, was finally granted refuge at the US embassy in Khartoum -- where she’s languished for about a month. Today, however, with the help of the Vatican and the Italian government, and in conjunction with the US State Department, she and her family arrived safely in Italy this morning:

Meriam Ibrahim, the Christian woman who was spared a death sentence for apostasy and then barred from leaving Sudan, met Pope Francis on Thursday after arriving in Rome to jubilant scenes following intense international efforts to free her.

Ms Ibrahim and her husband Daniel Wani thanked the pontiff for his support and he in turn thanked her for staying true to her Christian faith despite the threat of execution if she did not recant.

The 27-year-old was flown to Italy in a government aircraft and landed at Rome’s Ciampino airport accompanied by her family and Italy's deputy minister for foreign affairs, Lapo Pistelli, who flew to Sudan to collect her late on Wednesday

She was released after intense diplomatic negotiations from the Italian government and the Vatican ended an ordeal that lasted almost a year.

So what role did Italy and the Vatican play in securing Ibrahim, and her family’s, release? An indispensable one, it would seem:

[Deputy Minister of Foreign Affairs Lapo Pistelli] said Italy had become involved in the case because, as a Catholic country, it was very moved by Ibrahim's story and wanted to help.

Italy has good relations with Khartoum and offered to help the U.S. Embassy there to speed up the process of getting U.S. passports for Ibrahim and her family to leave the country, the minister said.

They succeeded, and now one of the most infamous cases of Christian persecution in recent memory can be laid to rest. Pope Francis, meanwhile, welcomed Meriam Ibrahim to the Vatican with open arms upon her arrival. The photograph taken of them, I believe, serves as a fitting and joyous conclusion to an otherwise traumatic and enervating world-event:

Ibrahim, her husband, and their two children are expected to fly to the US in a few days.