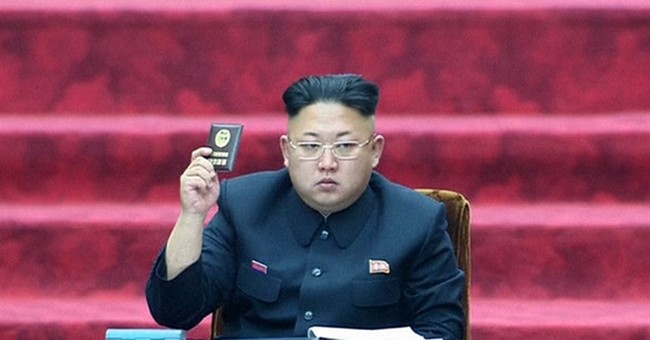 Why anyone would travel to North Korea “for fun” is beyond me. The appalling human rights atrocities are reasons alone to avoid the country at all costs. Nevertheless, the number of western travelers going there for "recreational purposes" every year is reportedly rising. Go figure.

Of course, there are always risks associated with visiting a country that has no formal diplomatic relations with the US, and which our own State Department urges US citizens not to visit. Americans Matthew Todd Miller and Jeffrey Edward Fowle just learned that the hard way. Common sense teaches us that there can be no assurances that once westerners enter North Korea, their safety and security will be maintained and protected. Remember, any charge can be levied against them -- or trumped-up -- at a moment’s notice. Even ones as absurd and ridiculous as this:

North Korea said Monday it is preparing to try two Americans who entered the country as tourists for carrying out what it says were hostile acts against it.

Investigations into Americans Matthew Todd Miller and Jeffrey Edward Fowle concluded that suspicions about their hostile acts have been confirmed by evidence and their testimonies, Pyongyang's official Korean Central News Agency said in a short report.

KCNA said North Korea is making preparations to bring them before a court. It did not specify what the two did that was considered hostile or illegal, or what kind of punishment they might face. It also did not say when the trial would begin.

Though a small number of U.S. citizens visit North Korea each year as tourists, the State Department strongly advises against it.

Fowle arrived in the county on April 29. North Korea's state media said in June that authorities were investigating him for committing acts inconsistent with the purpose of a tourist visit.

Diplomatic sources said Fowle was detained for leaving a Bible in his hotel room. But a spokesman for Fowle's family said the 56-year-old from Miamisburg, Ohio, was not on a mission for his church.

Sadly, these sorts of nebulous charges are par for the course in North Korea. Christianity is de facto outlawed and therefore proselytizing or evangelizing is strictly forbidden. But unlike Kenneth Bae -- who has been languishing in prison for over a year now -- these men reportedly weren't even visiting the country to spread the Christian faith. It didn't matter.

The AP reports that the US will now begin negotiating their freedom through the Swedish embassy. But given that US/North Korean relations are, shall we say, rather rocky at the moment, a timely and satisfactory resolution to this unsettling situation seems highly unlikely.