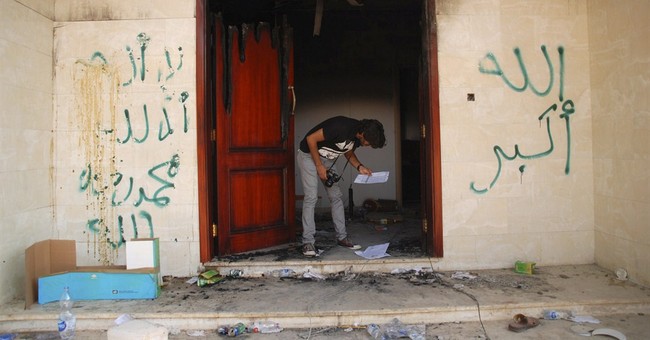 The president repeatedly claimed that he would hold those responsible for the coordinated and cold-blooded murders of four Americans serving in Benghazi, Libya on the eleventh anniversary of 9/11. But until today no terrorists had been captured, let alone held responsible, for their crimes. That, however, may be changing. US Special Forces have reportedly apprehended at least one suspect inside Libya, and he is currently on his way back to the United States to face the harsh prospect of American justice:

#BREAKING: A suspected terrorist linked to #Benghazi terror attack has been captured inside #Libya by U.S. forces/en route to the US

Details are sparse at the moment. Stay tuned for updates.

UPDATE: From the U.S. Department of Defense:

I can confirm that on Sunday, June 15 the U.S. Military -- in cooperation with law enforcement personnel -- captured Ahmed Abu Khatallah, a key figure in the attacks on U.S. facilities in Benghazi, Libya, in September 2012. He is in U.S. custody in a secure location outside of Libya. There were no civilian casualties related to this operation, and all U.S. personnel involved in the operation have safely departed Libya.

UPDATE: The Huffington Post’s Michael Calderone reported in October 2012 that the now-apprehended terrorist, Ahmed Abu Khatallah, did not go into hiding in the wake of the Benghazi terrorist raid on 9/11/12, despite numerous witnesses professing that he commanded it. Rather, he was living in the “open,” even sitting for interviews with prominent Western media outlets soon after:

The problem was that Abu Khattala, believed to be a leader of Islamist group Ansar al-Shariah, "remains at large and has not yet been questioned," according to The New York Times on Wednesday. An American official, speaking anonymously, said the U.S. had previously been tracking him. But it now wasn't even clear if Abu Khattala was still in Libya. The Wall Street Journal, also speaking with unnamed Libyan authorities, similarly reported that Abu Khattala "remains at large."

But it didn't take long for Abu Khattala to surface, thus demonstrating that unnamed "officials" quoted in articles may not always have the clearest idea of what's happening on the ground. And over the past 24 hours, he's denied any role in the attack during lengthy interviews with reporters out in the open.

"These reports say that no one knows where I am and that I am hiding," Abu Khattala told Reuters on Thursday. "But here I am in the open, sitting in a hotel with you. I'm even going to pick up my sister's kids from school soon."

This begs one inescapable question: if he was living carefree and in the open for a period of years, why was he only captured last Sunday -- and not two years ago?

“The arrest of Ahmed Abu Khatallah is long overdue and our military deserves credit for conducting a successful operation. There is evidence that he is one of dozens, if not hundreds of individuals, involved in the murder of four Americans in Benghazi. The Obama Administration has an obligation to share whatever information he offers with Chairman Gowdy and the Select Committee about events before and during the Benghazi attacks.”