Cantor: "I Couldn’t Be More Optimistic About the Future of this Country" 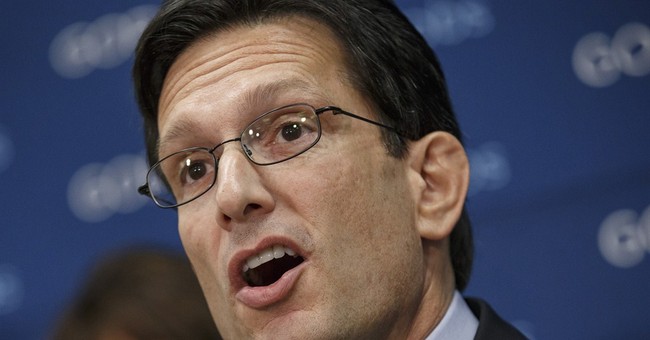 In his first public appearance since his historic loss last night, House Majority Leader Eric Cantor (R-VA) didn’t dwell on the past but instead spoke to the media about his hopes for America.

“I couldn’t be more optimistic about the future of this country,” he said.

He added that it was a privilege to serve with such distinguished colleagues for so long, praising his staff and other Capitol Hill public servants he had grown to know and appreciate over his many years of service.

He also took a few moments to list some of the reform measures he was most committed to and proud to champion: school choice, health care reform, and spending cuts.

“House Republicans get things done -- we get a lot done,” he said. Look no further, he continued, than all the Republican-passed bills currently sitting on Harry Reid’s desk.

Somewhat surprising, he also had a message of unity to his fellow Republicans.

“I hope all Republicans will put minor differences aside,” he exclaimed. Republicans, he said, have much more in common with each other than progressives and the Democratic Party.

Lastly, Cantor said he intends to serve out his term, and will step down as Majority Leader on July 31, 2014.