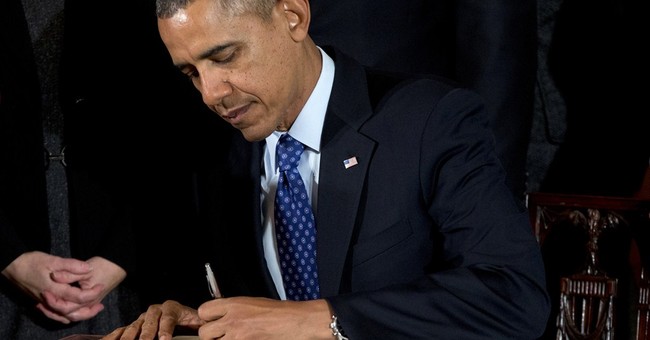 Yesterday we examined All State/National Journal’s quarterly survey, which showed the president’s approval rating at a paltry 41 percent. Today’s offering from a joint Washington Post/ABC News poll, however, isn’t much better.

In fact, the survey pegs the president’s approval rating at 41 percent as well, but that top line number is five percentage points lower than it was two months ago:

Democrats face serious obstacles as they look to the November elections, with President Obama’s approval rating at a new low and a majority of voters saying they prefer a Congress in Republican hands to check the president’s agenda, according to a new Washington Post-ABC News poll.

A few additional tidbits from the survey:

Health Care: As we all know the president’s health care law will probably be the single biggest political issue in 2014. This of course doesn’t bode well for Democrats. According to the survey, support for the law is deeply underwater (44/48), which isn’t exactly 'news' per se, in part because the law has been stubbornly unpopular for years. But at the same time, a majority says it is making health care costs more expensive (58%), and a plurality (47%) believes that Obamacare “will make the health-care system worse.” Is this the issue Democrats really want to run on in 2014?

The Economy: Good news is hard to come by on this perennially important domestic issue. Plainly stated, many Americans are pessimistic about the nation's economic future: only 28 percent say the economy is improving whereas 35 percent say it is not; in fact, 36 percent assert “it is getting worse.” And if that doesn’t sound bad enough, 66 percent of respondents say the nation is heading in the wrong direction. However, more respondents trust Democrats over Republicans to handle this issue.

Foreign Policy: Russia’s territorial annexation of Crimea has provoked outrage across the Western world. And while the administration hasn’t necessarily received overwhelmingly positive marks coping with the situation, respondents haven’t completely panned the administration, either. It is true that only 34 percent approve of the way Team Obama is handling the crisis, but 20 percent are undecided and only 46 percent disapprove. I suppose that latter figure, then, is actually good news for the White House, as the percentage of respondents who disapprove is under 50 percent.

Bottom line: Republicans are much more motivated to vote in the 2014 midterm elections than Democrats at this point, despite the fact that Democrats out-poll Republicans on a host of issues. And so if the president's approval numbers don’t improve dramatically by then, history instructs us that Democrats could be in for a very rough November.