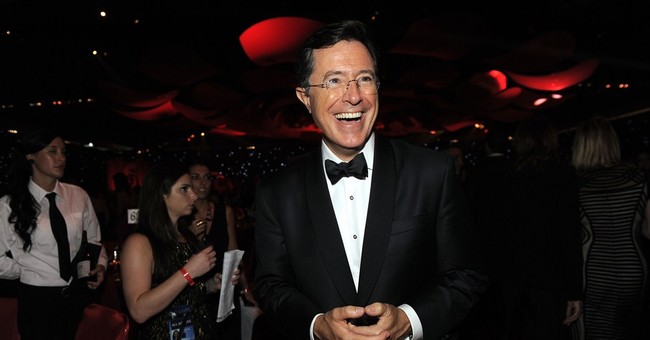 Stephen Colbert, the host, writer and executive producer of the Emmy and Peabody Award-winning “The Colbert Report,” will succeed David Letterman as the host of CBS’ “Late Show”, the company announced Thursday.

The move will be effective when Letterman retires from the broadcast, according to CBS Television Network officials.

The five-year agreement between CBS and Colbert was announced by Leslie Moonves, President and CEO, CBS Corporation, and Nina Tassler, Chairman of CBS Entertainment.

Letterman, the legendary, critically acclaimed host of the CBS late night series for 21 years, announced his retirement on his April 3 broadcast. Colbert’s premiere date as host of “The Late Show” will be announced after Mr. Lettermen determines a timetable for his final broadcasts in 2015.

Colbert, of course, is stoked:

“Simply being a guest on David Letterman’s show has been a highlight of my career,” said Colbert. “I never dreamed that I would follow in his footsteps, though everyone in late night follows Dave’s lead.

“Now, if you’ll excuse me, I have to go grind a gap in my front teeth,” he added.

It’s up for debate whether or not Colbert will host the “Late Show” from New York City, or tape on the West Coast. The network will release that information “at a later date.” Colbert, however, is bringing his team of writers with him wherever he goes. So perhaps we can look forward to more of this:

We'll see. But my hunch is Mr. Colbert won't be using the same material as late-night comic Jay Leno, either.

UPDATE: Some food for thought:

Colbert: "I won’t be doing the new show in character" http://t.co/tsWuWn28qi http://t.co/Iit6JAaG0o