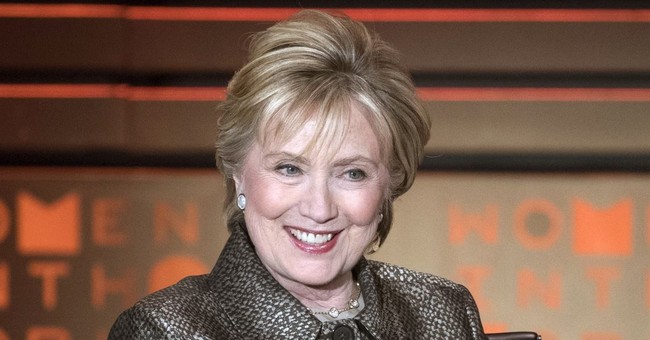 The Clintons were a couple of the targets of Judge Brett Kavanaugh’s frustrated testimony last week. The Supreme Court nominee declared at one point that he was the victim of revenge on behalf of the Clintons.

"This whole two-week effort has been a calculated and orchestrated political hit fueled with apparent pent-up anger about President Trump and the 2016 election, fear that has been unfairly stoked about my judicial record, revenge on behalf of the Clintons and millions of dollars in money from outside left-wing opposition groups,"  a seething Kavanaugh said. (The Hill)

Speaking at The Atlantic Festival in Washington Tuesday, former presidential nominee Hillary Clinton had a chance to respond.

Hillary Clinton laughs out loud when asked about Kavanaugh saying attacks on him are done on behalf of the Clintons and others, saying "it deserves a lot of laughter."

"I thought it was just part of the whole of his very defensive and unconvincing presentation" pic.twitter.com/jj5uK8RBsM

“It deserves laughter,” Hillary Clinton said, chuckling. “I thought it was part of the whole of his very defensive and unconvincing presentation.”

“They give us a lot of credit,” Clinton said jocosely.

Clinton then raised doubts about Kavanaugh's fitness for the court.

If anyone thinks there is such a thing as judicial temperament and that justices should approach issues with a sense of fairness, "there’s a lot to be concerned about," she said. His behavior was "unusual" and “out of bounds.”

“I found her very credible,” Clinton noted. “You have to ask yourself why would anybody put themselves through this if they didn’t think they had important information to bring to the Senate.

She found Ford’s presentation honest and felt “a great swell of pride” that she would be willing to put herself out there under these circumstances.

Clinton spoke on the growing movement of women who are making their voices heard and telling their stories. For instance, she commended the two women who followed Sen. Jeff Flake into the elevator on Capitol Hill before the committee voted to proceed on Kavanaugh's nomination last week. "They were determined" he knew they wanted to be taken seriously, Clinton said. Women, she added, are "finally righting the balance."

Women want to be "written into history, not written out of history," she finished.

David Catanase, senior reporter for U.S. News & World Report, watched Clinton’s remarks and observed she was on very “dicey” territory. After all, "she participated in denying women’s claims against her own husband” when he was accused of sexual assault by multiple women, he noted on CNN.

"It was difficult for her to be tough on Kavanaugh” Catanese noticed. "I don’t know how she gets around that."

He asked another question: “If we believe all the women, do we believe Juanitta Broaddrick?”