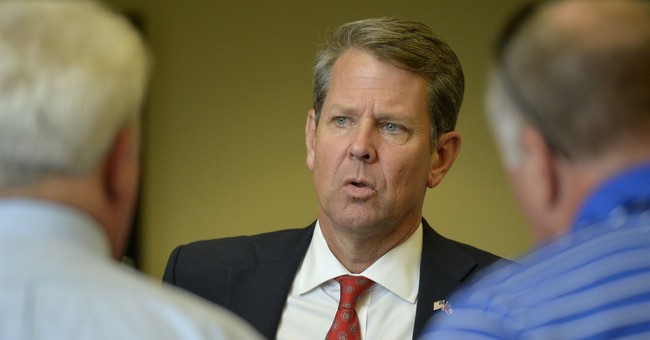 Congratulations to Brian Kemp on your very big win in Georgia last night. Wow, 69-30, those are big numbers. Now go win against the open border, crime loving opponent that the Democrats have given you. She is weak on Vets, the Military and the 2nd Amendment. Win!

Georgia Secretary of State Brian Kemp has defeated Lt. Gov. Casey Cagle in the state's gubernatorial GOP primary. He will proceed to face Democratic nominee Stacey Abrams, who if she prevailed would become the state's first black female governor.

Today is the day to vote for Brian Kemp. Will be great for Georgia, full Endorsement! https://t.co/yPND2bJ219

The Cagle campaign suggested they had been blindsided.

Kemp had trailed Cagle early on. In the first round in May, Cagle won 40 percent of the vote, to Kemp's 25 percent. A few factors allowed Kemp to start gaining ground. Secret recordings surfaced of Cagle admitting to voting for a terrible private school scholarships to keep donations away from an opponent. When the Kemp campaign tried to paint him as crazy, Cagle embraced the term.

Kemp also benefitted from a couple of controversial but effective ads, including one in which he sat with a gun on his lap to intimidate his daughter's date. The young man took the hint and pledged his support for the Second Amendment.

I'm a conservative businessman with a 4-Point Plan to put hardworking Georgians first. I'm also the proud father of 3 teenage girls. Here's the thing: If you want to date one of my daughters, you better have respect for women & a healthy appreciation for the 2nd Amendment. #gapol pic.twitter.com/dQvvfk06Rh