'This Is Garbage': Leonard Leo on Reports that Kennedy Had a Secret Deal With Kavanaugh 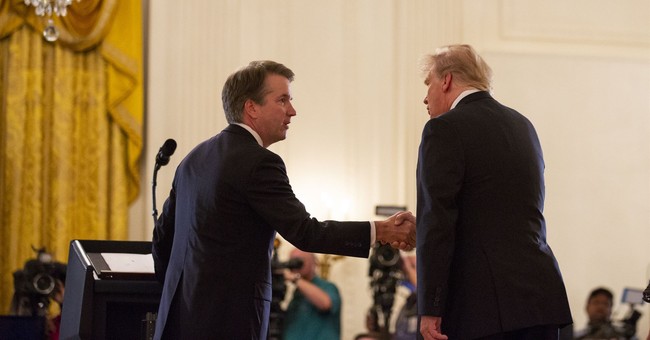 UPDATE: NBC reporter Leigh Ann Caldwell has corrected her earlier tweets, which she admits were misleading.

I’ve deleted this tweet because it incorrectly implies a transactional nature in Kennedy’s replacement. I am told by a source who was not directly part of the talks that Kennedy provided Pres. Trump/ WH a list of acceptable replacements. (1/2) pic.twitter.com/ptxJmrbH9S

Kavanaugh was the only one who was thought conservative enough to consider, I’m told. They added Kavanaugh – and 4 other names - to the public Federalist list that Trump would choose from in November. We are continuing to report this story. (2/2)

Two NBC News reporters had a source Tuesday who suggested that Justice Anthony Kennedy had decided way back in November to retire because it would pave the way for his former law clerk Brett Kavanaugh to take his place.

Kennedy and Trump/WH had been in negotiations for months over Kennedy’s replacement. Once Kennedy received assurances that it would be Kavanaugh, his former law clerk, Kennedy felt comfortable retiring, according to a source who was told of the discussions.

Furthermore, the five names Trump added to his list of Federalist Approved judges last November was to get Kavanaugh on that list. The other four names were considered cover, per source.

In other words: the decision has been baked for a while:
W/ @frankthorp

Politico was hearing the same thing from their sources.

So even as Trump dispatched his top lawyers to comb though Kavanaugh’s rulings and quizzed allies about whether he was too close to the Bush family, potentially a fatal flaw, the president was always leaning toward accepting Kennedy’s partiality for Kavanaugh while preserving the secret until his formal announcement, sources with knowledge of his thinking told POLITICO.

"That is garbage," according to Leonard Leo, an outside adviser to President Trump on Supreme Court confirmations.

"Anyone who knows Justice Anthony Kennedy knows that that is garbage," Leo told radio host Hugh Hewitt Tuesday. "He treats his office with tremendous dignity and independence. And there is literally no way in the world that that would have happened. And no president or White House Counsel who even knows Justice Kennedy a little bit would ever have tried to pull that stunt."

The reports suggesting there was some secret deal between Kennedy and Kavanaugh is "very insulting and offensive" to Kennedy, Leo added in defense of the retiring justice's integrity.

Hot Air's Ed Morrissey made the point that Kennedy, who has spent his career on the bench exercising his independence and establishing himself as the swing vote on the court, would probably not risk his legacy "to make a shabby deal on his way out."

"Brett Kavanaugh is among the most distinguished and respected judges in the country, with nearly 300 opinions that clearly demonstrate fairness and a commitment to interpreting the Constitution as it’s written, and enforcing the limits on government power contained in the Constitution.”

In her string of tweets about the Kennedy-Kavanaugh report, NBC's Leigh Ann Caldwell added, "To be clear: This is from one source and dont have any info on whether potus talked to kennedy about a possible replacement."