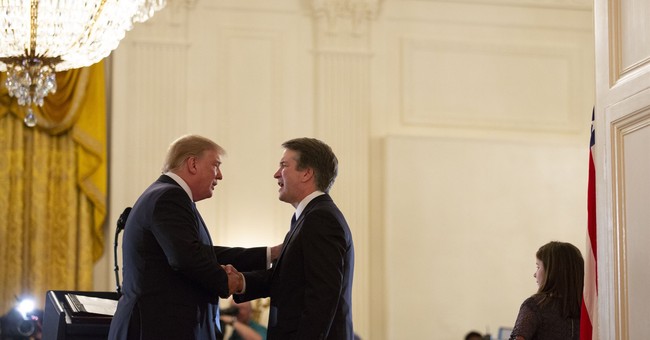 When you’re a Supreme Court nominee, everything you’ve written in the last decade is closely examined. That's why Brett Kavanaugh, President Trump's new Supreme Court nominee, probably isn't surprised that a certain Minnesota Law Review piece he wrote in 2009 about sitting presidents and indictments is getting plenty of attention. In the piece, Kavanaugh suggested that Congress might pass a law “exempting a President—while in office—from criminal prosecution and investigation, including from questioning by criminal prosecutors or defense counsel.”

“We should not burden a sitting President with civil suits, criminal investigations, or criminal prosecutions,” he continued. The “indictment and trial of a sitting President” would “cripple the federal government.” You can read his complete thoughts on the matter here.

Did Trump choose Kavanaugh because of this opinion, skeptics are now wondering. Vox suggests it's not coincidental.

President Donald Trump has picked a Supreme Court nominee, Brett Kavanaugh, who doesn’t think presidents should have to spend their time on pesky criminal investigations.

Perhaps not coincidentally, President Trump has been spending a lot of time dealing with a pesky criminal investigation.

Trump's preoccupation with special counsel Robert Mueller's probe into Russian interference suggests he was undoubtedly "thrilled" to learn that Kavanaugh believed that similar investigations tend to be burdens on the presidency. Indeed, Vox points out, CNN’s Jim Acosta reported that the Trump team reviewed these comments by Kavanaugh before choosing him.

Vox did point out that Kavanaugh was not advocating for the Supreme Court to interpret the existing law, but for Congress to change it. A Bloomberg Opinion writer flushed this out on Tuesday, using the argument to prove some media outlets have it all wrong.

Pause to take that in. If a law by Congress is necessary to fix the problem, it follows that without such a law, it is perfectly permissible under the Constitution to investigate a sitting president, as Starr did.

The new nominee's opinion also seemed to be a 360-degree turn from his earlier perspective on presidential indictments. In the 1990s, Kavanaugh worked on independent counsel Ken Starr’s investigation into President Bill Clinton and did not believe in giving the sitting commander in chief a "break." Yet, he later noted that the investigation may have distracted Clinton from going after Osama bin Laden.

One final note. Kavanaugh did maintain in his Minnesota Law article that while a president should be left alone while in office, he should be pursued after the fact. If his or her actions were extremely inappropriate, Congress can always use the impeachment route.

"If the President does something dastardly, the impeachment process is available."