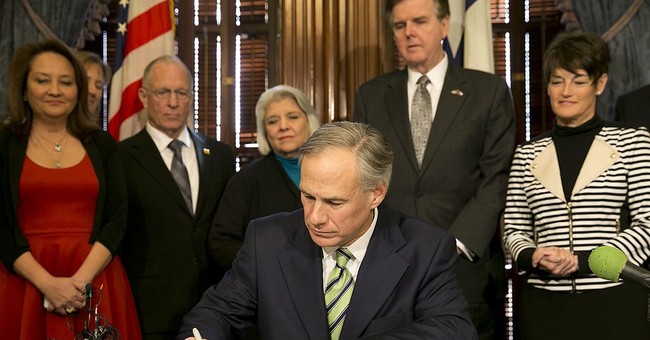 All the good pro-life news seems to be coming from Texas lately. First, we learned that the lifesaving 20-week abortion ban is staying put. Now, in a bold move that proves he isn’t going to be bullied by the country’s most powerful abortion giant, Texas Gov. Greg Abbott (R) just cut $1.2 million from Planned Parenthood’s budget and kicked them out of the state’s cancer screening program.

Gov. Abbott signed a two-year state budget on Saturday that would boot Planned Parenthood from The Breast and Cervical Cancer Services, a program that offers cancer screenings to low-income women. While Planned Parenthood supporters can’t fathom why the governor would be so cruel as to bar the organization from a program that provides health screenings to women, the necessity to do so comes down to one word: abortion.

It’s no secret the procedure is the organization’s most lucrative service. Planned Parenthood’s 2013 annual report revealed that abortions made up 94 percent of pregnancy services, while cancer prevention services decreased by 17 percent. Based on these numbers, can you blame pro-life Texas legislators for wanting to prevent taxpayer money from reaching Planned Parenthood’s hands?

The fight to strip power from the abortion giant goes back some years in Texas.

The Breast and Cervical Cancer Services provision in the budget nixes some of the last taxpayer dollars Planned Parenthood received in Texas. The Republican-led Legislature in 2011 slashed the state’s budget for family planning by two-thirds in an effort to keep health providers even loosely affiliated with abortion providers, namely Planned Parenthood, from receiving state tax dollars.

President Cecile Richards said the lack of funding will make it “impossible” for women to get these services. Not true, says Joe Pojman, executive director of Texas Alliance for Life.

“We think the money is far better spent on the numerous alternative providers that are available throughout Texas,” Pojman said. “I don't think that [Planned Parenthood] will be missed at all when they leave the program, because there’s such a vast network of providers — many of whom provide a far higher level of services.”

In other words, Planned Parenthood isn't a woman's only option.

Fewer dollars to Planned Parenthood means fewer abortions. This is a win for all of Texas.