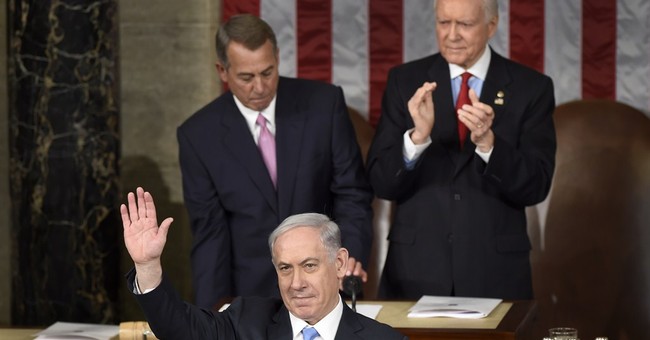 So Mr. Netanyahu tried to change the subject from internal inequality to external threats, a tactic those who remember the Bush years should find completely familiar. We’ll find out on Tuesday whether he succeeded.

That’s right. According to the sagacious editorial writer, Netanyahu did not come to Washington to warn the world of Iran’s potential plan to acquire nuclear weapons and obliterate Israel off the face of the earth. No, that was all a façade. His real piece of business was to try and make Israelis forget about their nation’s income inequality so he could gain more votes in this week's Israeli elections.

“If you’re seriously trying to affect American foreign policy, you don’t insult the president and so obviously align yourself with his political opposition. No, the real purpose of that speech was to distract the Israeli electorate with saber-rattling bombast, to shift its attention away from the economic discontent that, polls suggest, may well boot Mr. Netanyahu from office in Tuesday’s election.”

Of course! How did I not see that before? Obviously if you read between the lines of Netanyahu's address to Congress, "Today the Jewish people face another attempt by yet another Persian potentate to destroy us," is actually just a subliminal message for, "Forget all about those class struggles."

First of all, Netanyahu doesn’t need to distract Israelis from the economy, I’m sure they’re well aware – and even if he did, he certainly wouldn’t need to come to Washington, DC to do it. Secondly, the prime minister has made clear numerous times that his visit to Capitol Hill was to bring attention to the fast approaching and ill-advised US-Iran arms deal and implore the United States to reject it.

Indeed, the bulk of Netanyahu’s speech focused on the threat not only to Israel, but the rest of the world if Iran becomes a nuclear state.

This fragile context, however, was not enough of an explanation for Krugman. He continued to ask, “But wait: Why are Israelis discontented?”… What is there to complain about?," again suggesting the answer lies in the nation’s class differences.

Perhaps, Mr. Krugman, Israel’s complaint is less about the dollars lining their pockets and more about how radical Iranians have pledged to destroy them. It might be hard for Krugman to believe, considering our current administration fights for little, that Netanyahu is a leader who passionately defends his homeland every chance he can get.

Israel’s elections will be held this Tuesday and the fate of the nuclear arms deal will be decided at the end of the month.