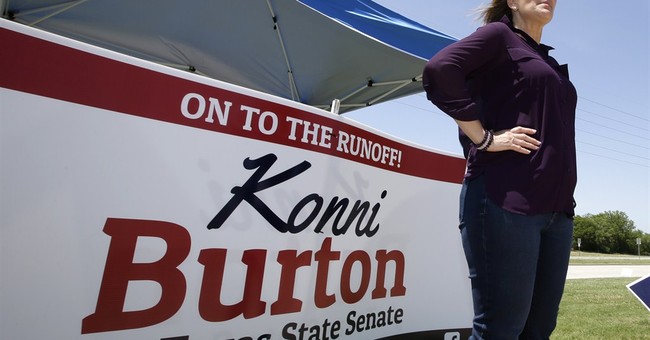 That was the bold proclamation of Konni Burton (R-TX), the Republican who won Wendy Davis's old seat in the 10th Senate district of Texas at her swearing-in ceremony on Tuesday. Her words also happened to be featured as the Austin Chronicle's Quote of the Week.

On her first day in office, Burton showed just how different her tenure would be than that of her predecessor. The new senator arrived at her swearing-in ceremony in a pair of "Stand for Life" boots. Her attire was extremely significant, considering Wendy Davis shot to fame in a pair of pink sneakers when she filibustered a pro-life bill in June of 2013.  At the encouragement of pro-abortion advocates and new liberal fans across the country, Davis opted to run for governor in 2014, losing in an embarrassing defeat to Attorney General Greg Abbott, instead of seeking another term in the State Senate, leaving the door wide open for a more conservative candidate.

Konni Burton grew up in a small Texas town called Banquete and entered politics after witnessing the out-of-control spending by both political parties, according to her official online profile. She became an active member of the NE Tarrant Tea Party Burton and, after the reelection of President Obama, decided to run for State Senate.

Burton told Breitbart News that she was excited to erase those pink sneakers from her district's memory and usher in a new lifesaving agenda:

“Senate District 10 was brought into national spotlight with a pair of shoes,” said Burton, “It’s humbling to be allowed the opportunity to redeem that history today. As a Senator I am here to protect the rights of the citizens of District 10, life is the first of those rights.”

After Davis announced her run for governor, it became all too clear that her pro-abortion agenda was not welcome in the Lone Star State. Much of her campaign donations came from out of state as her message failed to resonate with locals. What's more, her campaign proved to be self-destructive.

Konni Burton, however, was impressive from the start. The conservative ended up winning Davis's old seat with over 60 percent of the vote.

With this bold, pro-life conservative now working in the Texas State Senate, it's clear that SD 10 picked the perfect person to fill Wendy Davis's shoes.