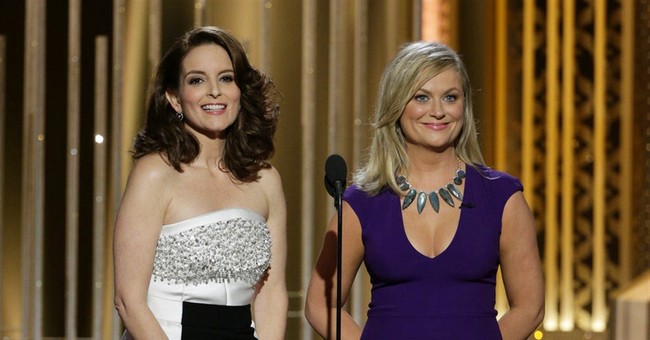 It was Tina Fey's and Amy Poehler's last night as cohosts of the Golden Globe Awards - and boy did they go out with a politically incorrect bang. In an interview with E! Online ahead of Sunday’s festivities, Fey warned that she and Poehler would have more freedom to say what they wanted this time around: “What are they going to do, fire us?” One particular target of Fey and Poehler's loose lips, was North Korea.

You'll remember that North Korea successfully bullied Sony Pictures enough to postpone the release of "The Interview." In the film, Seth Rogen and James Franco star as celebrity TV hosts who are recruited by the CIA to assassinate the North Korean dictator Kim Jon-un. North Korea was not amused with the plot and insisted it would be an 'act of war' should the movie reach theaters. It was an absolutely ridiculous threat to free speech, and it fit perfectly into the Golden Globe hosts’ monologue:

“Tonight we celebrate all the TV shows we know and love, as well as all the movies that North Korea was okay with.”

Fey and Poehler weren't the only ones to mock the bullying nation. Comedian Margaret Cho stole the show when she appeared dressed as a North Korean soldier and seemed unimpressed with the Hollywood presentation. In one especially hilarious moment, Cho (dressed as the soldier), demanded Meryl Streep take a picture with her while holding a magazine with Kim Jong-un’s face on the cover.

Fey and Poehler's last zinger about "The Interview," however, was against the film itself:

“North Korea called The Interview intolerable and a wanton act of terror. Even more amazing, not the worst review the movie got.”

At another courageous part of the night, was when Hollywood Foreign Press Association president Theo Kingma provided a brave defense of free speech, in light of last week’s terror attacks in France:

“Together we will stand united against anyone who will repress free speech, anywhere, from North Korea to Paris.”

Those words were welcomed with a standing ovation.

Kudos to Hollywood - they showed some courage last night.