Have You Met...Rep. Richard Hudson (R-NC) 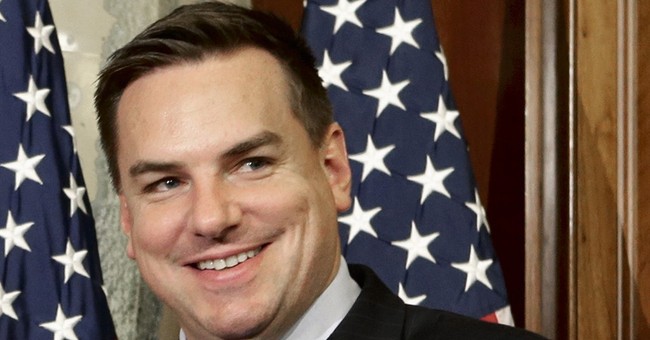 One day when he was a child, Rep. Richard Hudson’s (R-NC) dad dropped him off at a garbage site where he helped pick up trash until his father returned. It was a wakeup call, the congressman said. That day, he learned the importance of working for a living.

“My dad taught me the value of hard work,” Hudson told Townhall.

He would later accept jobs roofing buildings as a teenager and continued to harbor an impressive work ethic well into his adult years. He opened his own small business called Cabarrus Marketing Group, which offered business development services. Hudson said it was a “one-man ship,” but the trying role taught him more than just leadership skills. Running a business also proved to him just how much of a burden the government can be to entrepreneurship. He said a good chunk of his time was spent combing through government regulations. It's no different today. The Wall Street Reform and Consumer Protection Act, more commonly known as Dodd-Frank, Hudson explained, is one specific piece of legislation that has hampered small businesses.

“There's uncertainty in access to capital, and Dodd-Frank went way too far. Today, you can’t start a business unless you can self-finance.”

Dodd-Frank wasn't the only bill to come out of the Obama White House that has hurt small businesses. Obamacare has unleashed its own barrage of setbacks. The president's signature health care legislation forces businesses to offer health insurance to workers once their number of employees exceeds 50. What's more, the law also defines a full-time employee as someone who works more than 30 hours. Because of these regulations, many employers have fired employees or reduced their hours to avoid the added costs. Hudson shared a personal example to demonstrate Obamacare's real life negative effects on today's job market.

“I know one developer who said he’s never sat on more cash because his accountants can’t tell him what his health care costs are going to be next year.”

Instead of investing money in his company, buying new materials, or hiring new employees, this developer was forced to hold on to his money because of the Affordable Care Act’s not so cost-effective consequences.

In addition to small businesses, Hudson is also a champion for free speech. In 1954, Congress passed the Johnson Amendment, which states that people who are exempt from federal income tax cannot take part in any political campaign. President Lyndon Johnson had a specific demographic in mind when he originated this legislation, Hudson explained. After several pastors criticized the president for his leadership, he introduced the Johnson Amendment, prohibiting them from speaking their minds about political candidates in front of their congregations. More than 1,800 pastors have participated in Pulpit Freedom Sundays this year to protest the Johnson Amendment. Now, in his own effort to counteract this direct threat to the First Amendment, Hudson is an original cosponsor of the Pastor Free Speech Act, legislation that ensures pastors don't lose their free speech as soon as they step behind the pulpit.

Hudson has other legislative efforts for which he can be proud. He chairs the Transportation Security Subcommittee and in that role he managed to get an acquisition reform bill for the TSA passed out of the House. This piece of legislation increases transparency and requires the TSA to be forthcoming about its expenditures. He worked with Democrats on the bill and it passed unanimously. He describes it as a conservative reform bill that passed in a bipartisan effort.

The congressman isn't satisfied yet. This year, Hudson’s goal is to enact the Sunset Law, a bill that would do the seemingly impossible: Put a handle on bureaucracy.

“The law would put an expiration date on government departments," he explained. "It would offer some serious oversight. I am convinced this would have the biggest impact on the way things work in D.C.”

In a way, you could say Hudson is still cleaning up garbage.