TV Critic: Root for David Gregory Because He's the 'Underdog' 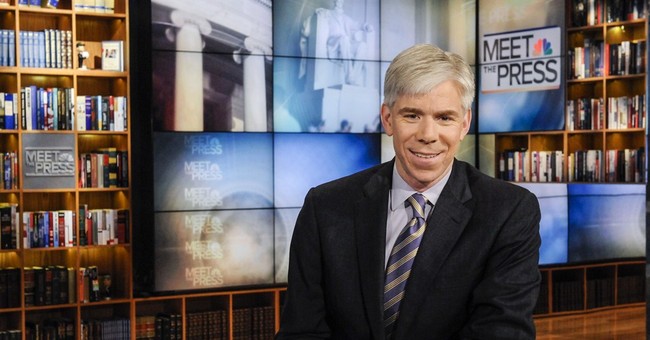 Since "Meet the Press’s" engaging host Tim Russert passed away in 2008, the NBC show has suffered in the network weekend ratings battle. Some outlets, like The Washington Post suggest new host David Gregory is causing the audience loss. NBC even hired a psychological consultant to try and analyze his personality to try and figure out why no one was tuning in.

The news got worse when "Meet the Press" producer Chris Donovan decided to quit after 12 years on the show and head to ABC's "This Week."

But, one TV critic is standing up for Gregory. In an op-ed in The Buffalo News, Alan Pergament explained why Gregory deserves to hold on to the ‘Meet the Press’ reins. He first reasons that Gregory’s ratings aren’t so bad in Tim Russert’s hometown:

My immediate reaction was to see how Gregory is doing in Russert country.

And surprise, surprise, he isn’t doing that badly at all.

Channel 2’s ratings for “Meet the Press” seems to have recovered from the big hits the program took here in 2011.

They weren’t much different under Gregory during the February 2014 sweeps than they were during the last sweeps period before Russert died on June 13, 2008.

“Meet the Press” had a 4.5 rating under Gregory in February, the same rating it had in Russert’s final sweeps period before his death in May 2008. Of course, this past February sweeps deserves an asterisk because NBC got a boost from the Sochi Olympics.

But there is other evidence that things haven’t changed to a scary degree. During the last four sweeps periods from February 2013 to February 2014 under Gregory, “Meet the Press” averaged a 4.0 rating on Channel 2.

So, because the show is not doing terribly in Buffalo, Gregory should stay put? Seems like a stretch to me. Permagent’s other reason for cheering for Gregory is because he’s the ‘underdog’:

But I’m rooting for the guy, especially now that he is taking a beating and is the underdog.

Gregory will never be as loved as Russert will be – certainly not in Buffalo.

But if Buffalo viewership is any indication, NBC’s vote of confidence is warranted and it would be wise to give Gregory a chance to grow in the job – as well as on the audience.

While Permagent is welcome to give his expertise on the matter, he waits until the latter half of his piece to reveal he doesn't even watch the show:

Admittedly, my well-documented love of “Sunday Morning” has diminished my viewing of Gregory’s “Meet the Press.”

I see. Please take your two cents back.