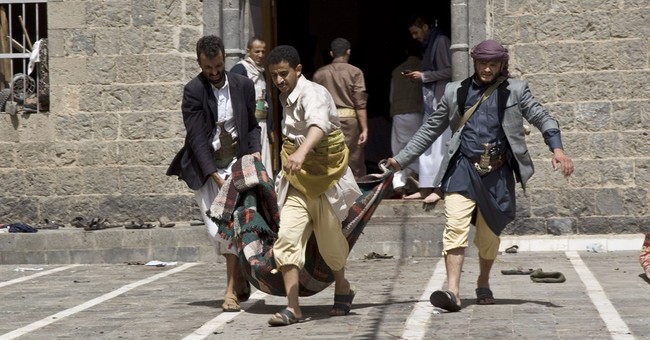 White House Press Secretary Josh Earnest described the Obama administration's policies towards Yemen as a "template" for the rest of the world Monday, even as United States personnel evacuated the country and al Qaeda seized control of a key city.

"The case that we have made is that Yemen did serve as a template for the kind of strategy that we would employ and have employed to mitigate the threat from extremists around the world," Earnest said when asked if President Obama still considered Yemen a model of success.

"Ultimately our goal here is to build up the capacity of local countries so that they can assume responsibility for their own security situation," Eranest continued. "And that has both the effect of stabilizing the country so that extremists can't use it as a safe haven to plot and carry out attacks agains the west, but it also means that these countries can better provide for the security situation inside them so they aren't vulnerable to extremist actions on their own."

It is unclear, however, if Obama's policies are creating the type of stability that Earnest described. Yemen's central government is currently under sustained attack from Iranian-backed Houthi rebels, al Qaeda, and the Islamic State.

Robin Wright, a security and defense analyst with the Woodrow Wilson Center told CNN that the country is already becoming a fertile environment for terrorists to grow and export violence. "It's becoming much like Syria, much like Afghanistan was at the peak of its instability," she said.

For his part, Earnest would seem to agree with that Syria comparison, which he held out as another "relevant example" of the Yemen-template working.

Almsot 200,000 people have died in Syria since 2011 and, despite repeated efforts by Obama, Syrian President Bashar al-Assad continues to use chemical weapons on his own people.