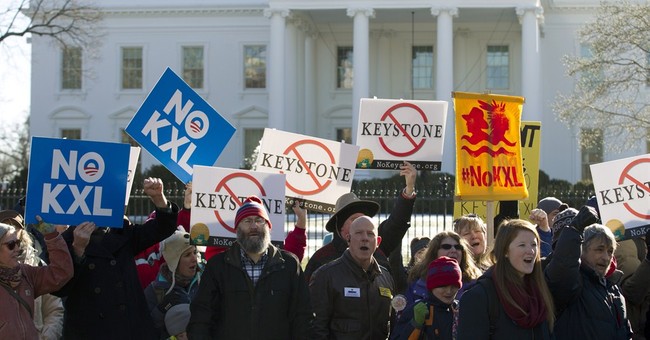 President Obama vetoed legislation authorizing construction of the Keystone Pipeline Tuesday without any ceremony or photographers on hand.

"Through this bill, the United States Congress attempts to circumvent longstanding and proven processes for determining whether or not and operating a cross-border pipeline serves the national interest," Obama's official veto statement read.

The "longstanding and proven" process Obama referred to is the National Environmental Policy Act which establishes rules for how all federal agencies must approve any infrastructure project.

For the Keystone Pipeline, that process began over six years ago and has included more than 20 scoping meetings, more than a dozen field hearings, and two 1,000-page-plus Environmental Impact Statements.

Asked whether 2300 days was a reasonable length of time to conduct an evaluation, White House Press Secretary Josh Earnest told reporters today, "Well I think it is certainly fair to suggest that the State Department is conducting an in-depth review."

The Obama administration's faith in the NEPA process is perplexing since they claim to want to increase federal infrastructure spending to create jobs, but any project funded by the federal government must go through the exact same NEPA process that has hung up Keystone for more than six years.

After his $1 trillion-plus economic stimulus failed to produce the construction jobs Obama predicted it would, Obama even joked to his own Jobs and Competitiveness Council, "Shovel-ready was not as shovel-ready as we expected," Obama said.

Obama's veto of the Keystone Pipeline today is just another reason why that joke is still true.