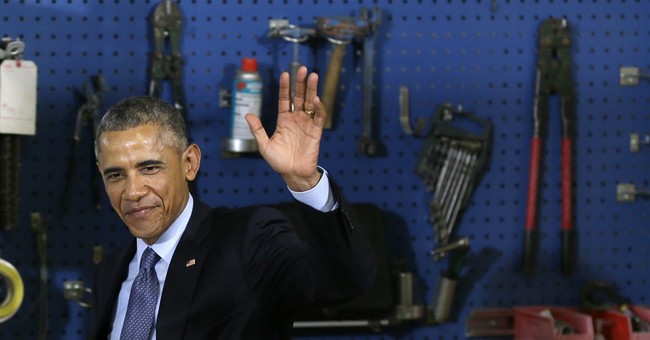 Asked if Obama new budget would hike spending, Earnest replied, "The President has been pretty clear about the fact over the last two weeks that now is exactly the right time for us start making some policy decisions that will invest in middle class families."

Thanks to a slowly recovering economy, the federal budget deficit has shrunk from $1.4 trillion in Obama's first year in office, when he passed a trillion dollar stimulus, to just $506 billion today, a figure still higher than any year President Bush was in office.

And according to the Congressional Budget Office, the deficit will continue to fall in 2015, sinking to $469 billion. But thanks to exploding mandatory programs, including Obamacare, the deficit will then begin to rise again, hitting $556 billion when Obama leaves office and reaching $737 billion by 2020.

It is unclear if Obama's new budget will have any new policies that address the deficit explosion set to detonate after he leaves office.

School lunch guidelines rolled back on Michelle Obama's birthday
Hotair
Rep. Doug Collins: This Statement Made by the House Majority Leader Should Alarm Every American
Redstate