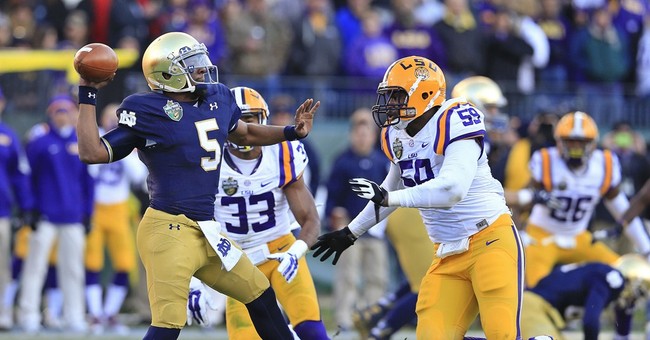 Today, college football fans will enjoy the first round of the first playoff-like system for the sport.

First, Florida State will play Oregon in the Rose Bowl at 5:00 PM, and then later at 8:30 PM, Alabama will play Ohio State in the Sugar Bowl. The winners of both games will then play on January 12th in Dallas for the first College Football Playoff National Championship.

While the system is no doubt an improvement over the Bowl Championship Series system, it still leaves far too much power in the hands of politicians off the field, and not enough control in the hands of teams on the field (just ask Baylor and TCU).

It may never happen, but I'd still love to see a true college football national championship. One where all conference champions got to decide their fate on the football field. One where all the old classic rivalries were revived. And it wouldn't be that hard.

First, we'd have to realign the conferences back to their former states.

The SEC would go back to a true round robin (from west to east): LSU, Ole Miss, Mississippi State, Alabama, Auburn, Vanderbilt, Tennessee, Kentucky, Georgia, and Florida

The Big 10 would go back to having 10 teams (from west to east): Minnesota, Wisconsin, Iowa, Illinois, Northwestern, Indiana, Purdue, Michigan, Michigan State, and Ohio State.

Finally, a two division super conference would be created out of the remaining schools. These schools would play just an 11 game schedule and there would be a championship game on the last day of the season when the rest of the conferences were playing their big end of the year rivalry games (e.g. Alabama v Auburn, Pittsburgh v West Virginia, USC v UCLA, Michigan v Ohio state etc.)

That would give us 8 conference champions who could then be paired up in traditional New Year's Day Bowls, including:

Two semi-final games would then be played at the two schools with best records against Big 7 conference opponents that year. Then a championship game at a neutral site.

All of the other bowl games would continue as normal.

The biggest barrier to this plan, of course, is the existing television money driven conference realignment.

But if game attendance continues to fall, and schools like Maryland miss playing ACC rivals like Duke in basketball, there is always a possibility a big network could broker such a new system in the future.