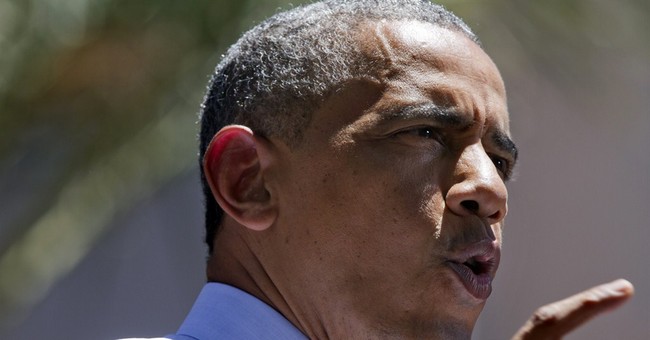 Despite an ongoing humanitarian crisis at the border, President Obama is set to announce a major expansion of his already liberal executive amnesty program, according to multiple White House friendly sources.

Obama told the groups what they had been dying to hear—that he was going to condemn House Republicans for inaction and set the most expansive legal course permissible to beef up border security, slow deportations of noncriminal aliens, and provide legal status to millions of undocumented workers—all by himself. ... Obama made it clear he would press his executive powers to the limit. He gave quiet credence to recommendations from La Raza and other immigration groups that between 5 million to 6 million adult illegal immigrants could be spared deportation under a similar form of deferred adjudication he ordered for the so-called Dreamers in June 2012.

When President Obama issues executive orders on immigration in coming weeks, pro-reform activists are expecting something dramatic: temporary relief from deportation and work authorization for perhaps several million undocumented immigrants. ...It’s hard to pin down how many people this would cover; it would depend on how the administration crafts the order. But the numbers are substantial. According to the CBO, there are an estimated 4.7 million undocumented parents with a minor child living in the U.S., and 3.8 million whose children are citizens. Around 1.5 million undocumented immigrants are married to a U.S. citizen or lawful resident, but have been unable to gain legal status themselves.

The president has suggested privately that he would not go as far as extending temporary protections to all 11 million undocumented immigrants who would have qualified under the Senate bill. Instead, he’s weighing how to provide relief to subsets of the population based on family ties, longevity in the country or employment background. It’s unclear where he’ll draw the line, but advocates expect him to go far based on his initial statements that he wants to max out his legal authority.

All of these actions would, of course, be a huge flip-flop for Obama who has been claiming for months that his June 2012 DACA program was the absolute legal limit of how far he could stretch his executive powers.

Of course this would not be the first time Obama flip-flopped on the extent of his executive immigration powers. For the first three years of his presidency he insisted he did not have the legal authority to end deportations unilaterally.

“This notion that somehow I can just change the laws unilaterally is not true,” Obama told Hispanic journalists at a White House roundtable in November 2011. “The fact of the matter is there are laws on the books I have to enforce. And there is a great disservice done to the cause of getting the DREAM Act passed and comprehensive immigration reform passed by perpetuating the notion that somehow by myself I can just go and do these things.”

Then in 2013, when activists pushed Obama to expand DACA, Obama insisted, "If, in fact, I could solve all these problems without passing laws in Congress, then I would do so. But we’re also a nation of laws. That’s part of our tradition. And so the easy way out is to try to yell and pretend like I can do something by violating our laws."

Why has Obama changed his mind on the limits of his executive power so many times?

Despite the short-term political consequences, in the long run a bold stroke could help cement the Democratic Party’s ties with the vital and fast-growing Hispanic voting bloc. And it would be a legacy for Obama, a cautious chief executive whose presidency has largely been shaped by events outside his control. In the case of immigration, he has the capacity to ease the pain felt by millions with the stroke of a pen.

Damn the rule of law. All glory to Obama's legacy and the Democratic Party's emerging majority.