Juggalos, Trump Supporters to March on Washington on Sept. 16 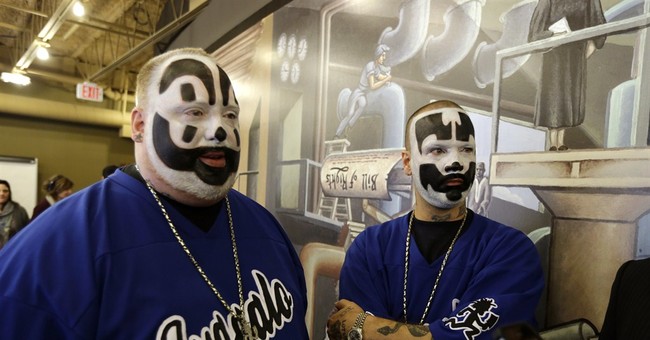 September 16, 2017 may be an interesting day in Washington, D.C. Not only is there a scheduled "Mother of All Rallies" for Trump supporters, there's also a...Juggalo March.

For the unaware, Juggalos are fans of the music group Insane Clown Posse (ICP). They're known for their rather unruly behavior, affinity for the beverage Faygo, distinctive face paint, and overall outlandish antics. Each year, there's the "Gathering of the Juggalos" that brings thousands of ICP fans together for a weekend. Some of the videos that emerge from the Gathering of the Juggalos are, erm, interesting, to say the least.

This year, the Juggalos are taking to the streets of D.C. to protest how the FBI has labeled them to be a “a loosely organized hybrid gang.” According to the official Juggalo March website, this designation has caused fans of ICP to lose jobs, be barred from the military, and even lose custody of their children.

Over the past five years, our legal team has heard testimonies and reports from Juggalos all over the nation who have lost custody of their children, been fired from jobs, denied access into the armed forces, and the most common consequence — being officially labeled as a gang member by law enforcement agencies for wearing Juggalo related clothing or brandishing one or more Juggalo tattoos.

The goal of the Juggalo March is to demonstrate to the FBI and the world that Juggalos are not violent, and rather are a "family" instead of a "gang, public menace, [or] cult." The Juggalo March, and its accompanying concert, have been planned for well over a year.

The two events begin somewhat near each other, with the "Mother of All Rallies" set to begin at 11 a.m. by the Washington Monument, and the Juggalo March begins an hour later near the Lincoln Memorial.

Let's hope a good, safe time is had by all.