Fifteen Dollars an Hour for Thee, but Not for Me: California Unions Request Exemption from New Wage Law 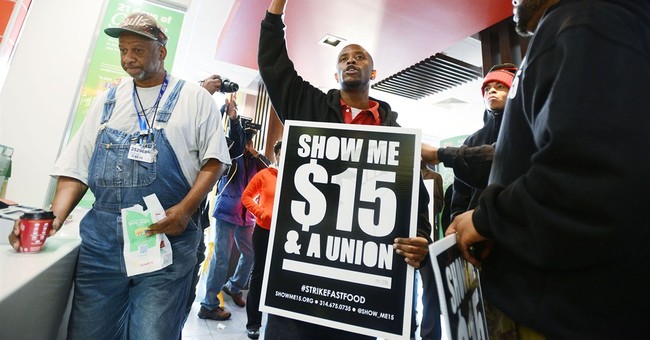 Los Angeles recently passed a wage-increase mandate that will eventually raise the minimum wage in the city to $15 an hour--backed by the support of several major labor unions. Those very same labor unions now want an exemption from the wage law.

From the L.A. Times:

But Rusty Hicks, who heads the county Federation of Labor and helps lead the Raise the Wage coalition, said Tuesday night that companies with workers represented by unions should have leeway to negotiate a wage below that mandated by the law.

"With a collective bargaining agreement, a business owner and the employees negotiate an agreement that works for them both. The agreement allows each party to prioritize what is important to them," Hicks said in a statement. "This provision gives the parties the option, the freedom, to negotiate that agreement. And that is a good thing."

Nowhere in that editorial is the "leeway" to negotiate a sub-15 dollar wage mentioned. In fact, supporting a law that would raise the wage to a certain price and then backtracking on this support to pay employees something lower sounds eerily similar to the "wage theft" described in the article.

Clearly, there's an economic advantage when non-unionized competitor businesses are forced to pay their employees six dollars more than California's nine-dollar minimum wage. Employers seeking to avoid the higher wage (which has already threatened the survival of some small businesses elsewhere in the state) now have an incentive to join the union, who gains the new union dues and money from these previously non-unionized employees. The unions are the only winners in this (incredibly sneaky and backhanded) wage arrangement. (Or, alternatively, employers will seek out illegal immigrant labor to be paid under the table at a lower wage than 15 dollars an hour.)

L.A.'s minimum wage law hasn't gone into effect yet, and won't reach $15/hour until 2020, but the furious backpedaling has already begun.