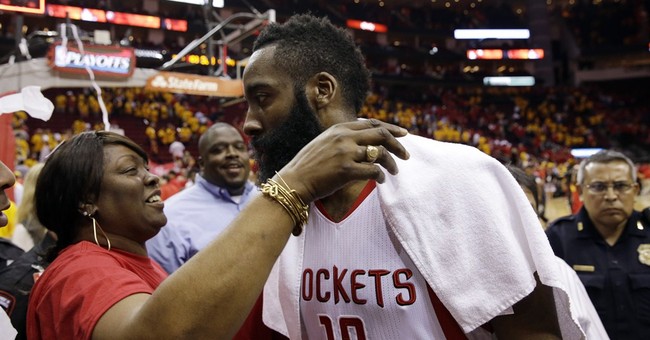 As the Houston Rockets took an insurmountable lead over the Dallas Mavericks in the series-clinching Game 5 victory, Shanks tweeted from the Rockets' account an emoji of a horse and a gun, saying "Shhhhh. Just close your eyes. It will all be over soon." The Mavericks logo and mascot is a horse. 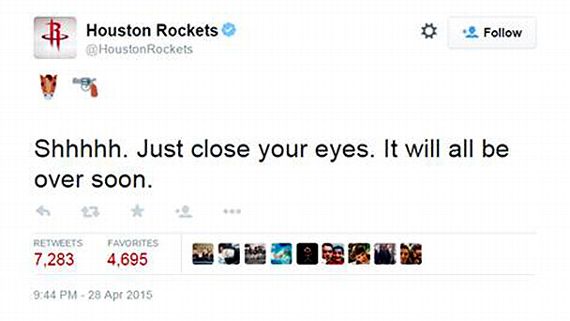 The Dallas Mavericks, apparently bitter and unable to take a joke, replied with the following:

@HoustonRockets Not very classy but we still wish you guys the best of luck in the next round.

The Rockets then deleted the original tweet and issued an apology.

A cursory glance through the Rockets' Twitter feed (well, before they fired Shanks) shows that the organization generally used a very casual and humorous style of tweeting, not unlike other sports teams (notably the L.A. Kings and Dartmouth Men's Ice Hockey). While the whole "shooting a horse" emoji combination might have been a tad harsh, viewed in context with the rest of the feed it's fairly consistent with the team's social media brand. The Mavericks have a different, more "professional" style of tweeting that tends to be more informational than entertaining.

Furthermore, it's absolutely ridiculous that a man could lose his job over what is essentially "emoji violence." As a social media manager, a person's job is to bring attention to the organization's social media accounts. For what it's worth, the Rockets have over 20,000 more followers than the Mavericks, so clearly Shanks was doing something right.

I may have been the first person in history to be fired due to an emoji combination. That's something, I guess.

Shanks should not have lost his job because a rival Twitter account was "offended." That's absurd. This is, sadly, another example of political correctness gone crazy. Shanks should still be employed. The Mavericks should work on their basketball skills instead of whining on social media. Period.