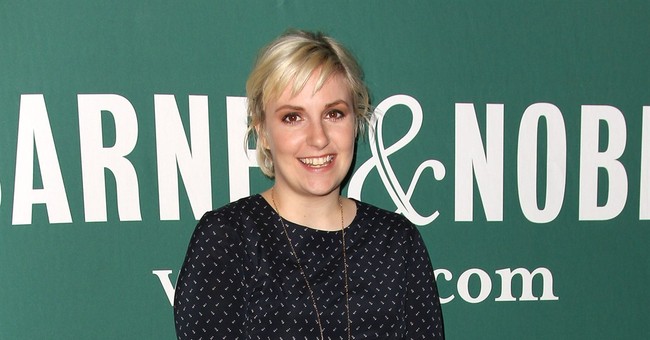 Actress and writer Lena Dunham's memoir Not That Kind of Girl was published last month. In it, Dunham shared several stories from her childhood and early adulthood, including several deeply disturbing anecdotes about sexually experimenting with her toddler-aged sister. After a post written by National Review's Kevin Williamson went viral, Dunham responded by...getting angry at "right-wing news" websites.

The right wing news story that I molested my little sister isn't just LOL- it's really fucking upsetting and disgusting.

I mean, agreed, those stories were deeply upsetting...

And by the way, if you were a little kid and never looked at another little kid's vagina, well, congrats to you.

Many took to Twitter to express their outrage at the fact that a woman who "glibly" wrote about sexually abusing her sister during their childhood had largely escaped criticism for the act, and to inform Dunham that her critics were not just old white conservative men.

I need @lenadunham to understand that it's not just straight white conservative men that are disgusted by these latest revelations.

And all of yall used to stan for Lena Dunham ??

#yall elevated Lena Dunham to untouchable status. The kind of person who glibly writes about sexually abusing a baby.

So if Lena Dunham was a man admitting to molesting his sister at seven...would people still be defending him? #sickgirl #LenaDunham

“@MissZindzi: And she's not even saying, "NO THIS IS FALSE". She's saying "don't act like yall never did that"” classic abuser language

Also, the sexual predator line is Dunham's not truthrevolts. She wrote it that way.

Let's be clear though. Dunham admitted that she engaged in behaviors like a "sexual predator" toward her sister.

Others called for Dunham to be dropped as spokesperson for Planned Parenthood and for her show to be ended:

[Watching to see if Planned Parenthood will continue to use Lena Dunham as a spokesperson.]

You know what I'm sitting on that really hurts? I can't support @PPact so long as they keep touting Lena Dunham out for their campaigns.

.@PPact I cannot support you if you continue to use Lena Dunham due to my own personal history of sexual abuse from a family member.

And one person noted the grim irony that Dunham had managed to united various factions of Twitter together against her.

Dunham's stories were deeply disturbing, and the fact that the manuscript was read and approved by several people prior to publication is even worse. Dunham admitted and wrote--candidly, even--about these stories and the downright disturbing actions of her younger self. It's not the fault of "right wing news" websites that someone has finally called her out on her actions.