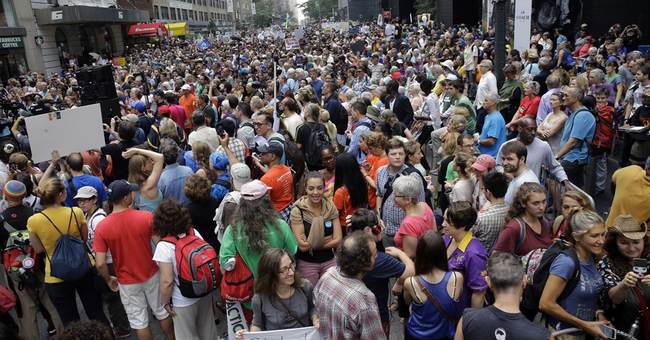 Thousands of people, including actors and politicians, marched today in cities across the world to encourage world leaders to take greater action on the issue of climate change. The United Nations Climate Summit is set to begin in two days.

The march was one of a series of events large and small held around the world — organizers said 40,000 marchers took part in an event in London, while a small gathering in Cairo featured 50-foot art piece representing wind and solar energy — two days before the United Nations Climate Summit. More than 120 world leaders will convene Tuesday for the meeting aimed at galvanizing political will for a new global climate treaty by the end of 2015.

The New York march drew people from all over the country. A contingent from Moore, Oklahoma — where a massive tornado killed 24 last year— took part, as did hundreds of New Yorkers affected by Superstorm Sandy, which the U.S. National Oceanic and Atmospheric Administration and the British meteorological office said was made more likely by climate change.

While I'm not here to argue about the legitimacy of climate change and will agree that people should be environmentally conscious, some of the people at the march in NYC were a smidge hypocritical.

For instance, Katie noticed this gem:

Are those shoes made w/ petroleum? Yup. "@Peoples_Climate: Yes We Can! A group from Kingston Ontario #PeopleClimate pic.twitter.com/qHwGj5L7kc”

...and The New York Times included the following quote in their piece about the marches (emphasis added):

Participants from across the country began arriving early on Sunday morningat the staging area near the American Museum of Natural History. Rosemary Snow, 75, stretched her legs after a nearly 14-hour bus drive from Georgia.

“I thought we’d have a lot of younger people on the bus,” said Ms. Snow, who made the trip with her grandson. “There’s a really great mix of people.”

While it's possible that Snow came to New York City on a hybrid-powered (or some other "green" fueled) bus, regardless, a bus isn't the most fuel-efficient vehicle. Is it really that environmentally friendly to go on a 28-hour round-trip bus ride to protest climate change?