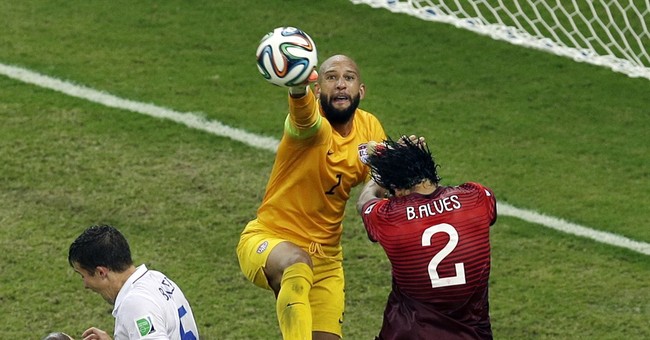 While the United State's Men's National Soccer Team suffered a devastating loss in the World Cup against Belgium on Tuesday, one highlight of the game was the superb play of U.S. goalkeeper Tim Howard. Howard had 16 saves, the most of any goalkeeper ever in the tournament, and kept the American side competitive in the game. Fans everywhere were in awe of Howard's performance, and one even took the initiative to name him the new Secretary of Defense--on Wikipedia, at least. The White House, to their credit, were good sports in the matter and politely denied rumors that Howard will be replacing Sec. Chuck Hagel any time soon.

"I don't have any personnel announcements to make," Press Secretary Josh Earnest said Wednesday after a reporter asked "if the White House had anything to do" with the Wikipedia change.

"Unfortunately I can't claim credit for that brilliant idea that was manifested on Wikipedia," Earnest said. "But I think even Secretary Hagel would agree with me that Tim Howard demonstrated an ability to repel an opponent's attacks with remarkable courage and bravery and athleticism yesterday."

Jimmy Wales, the founder of Wikipedia, tweeted that while he's very against vandalism of the site, he found the edit to be "exquisite."

I do NOT APPROVE of vandalizing wikipedia for comedic effect. But this is exquisite: http://t.co/ReAWTYyppQ

And, for what it's worth, Hagel actually called Howard to congratulate him on his play and for the success of Team USA in Brazil. He also invited the team to come to the Pentagon later this year.

From 1 SecDef to another: Hagel calls @timhowardgk to say thanks for defending USA. We (USA) are proud of @ussoccer! pic.twitter.com/M8nsYdlXFn