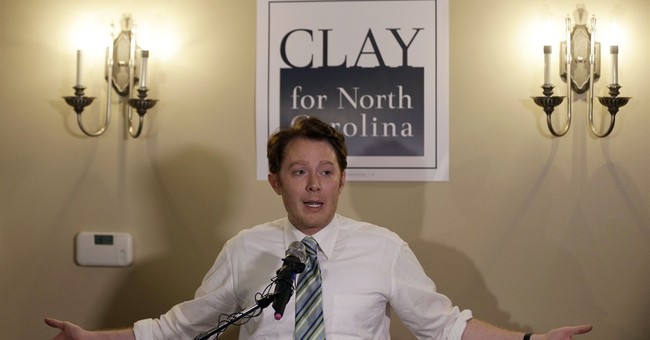 It's deja vu all over again for Clay Aiken: His primary race has come down to the wire, and is considered to be too close to call nearly a day after the polls have closed. Aiken currently has a slim 369-vote lead over Keith Crisco in the Democratic primary for North Carolina's second district. The winner of the primary will face incumbent Congresswoman Renee Ellmers, who easily defeated challenger Frank Roche in the Republican primary with 56 percent of the vote.

With all precincts reporting early Wednesday, Aiken, once a runner-up on TV's "American Idol," led Crisco by 369 votes in the 2nd Congressional District. In total, Aiken received 40.8 percent of the approximately 28,500 votes cast to Crisco's 39.5 percent. The race's third candidate, licensed family counselor Toni Morris, received 19.6 percent of the vote.

Aiken rocketed to fame during the second season of the reality show American Idol. Known for his cute-as-a-button looks and talented vocals, Aiken finished second to Ruben Studdard by 134,000 votes out of the 24 million cast, one of the closest finishes of the show, ever. Aiken has no political experience, but was employed as a special education teacher prior to his singing career.

Aiken also appeared on the Celebrity Apprentice and in various theater productions, including Monty Python's Spamalot on Broadway.

Voters in the North Carolina primary had to vote the traditional way with a ballot, not by phoning in 1-866-IDOLS02.