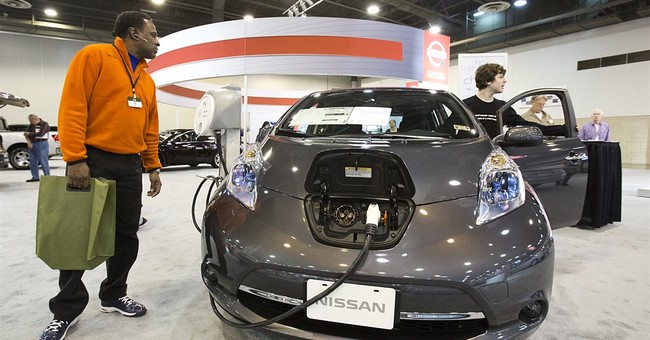 So often the left entices their party with "Eco-friendly," science savvy, earth loving phenomenons. However, the National Bureau of Economic Research just found that on a per-mile basis electric cars are on average worse for the environment when compared to their gas-powered friends.

This new study proves that subsidizing these environmental "friendly" cars should be put to a halt.

In monetary terms, electric cars are about half-a-cent worse per mile for the environment than gas-powered cars, on average. This means that if a government wants to tax a car based on how much it pollutes, electric cars should be taxed half of one cent more per mile driven than gasoline cars.

This past Tuesday the Obama administration gathered to rally support on climate change mainly stressing the impacts of on public health and the shortening of life:

casting "climate change as a moral issue, saying its health effects target society's most vulnerable, including children, the elderly and the poor.

Contrary to Obama's measures is the ever true reality that in purchasing an electric car it actually "makes society as a whole worse off because electric vehicles tend to export air pollution to other states more than gasoline vehicles."

Ironically, in 2008 Obama promoted electric cars by administering "an ambitious goal of putting 1 million advanced technology vehicles on the road by 2015."

With these efforts Obama was trying to reduce oil consumption, however this new study proves that the power for electric cars has a new source of energy that needs tackling: coal.

Although the typical assumption is that electric cars are cleaner than gasoline-fueled cars, the power for electric cars has to come from somewhere, and it's often from coal-fired power plants. "Rather than simply accepting the assertion of environmental benefits from electric vehicle use, this paper conducts a rigorous comparison of the environmental consequences of gasoline and electric powered vehicles, specifically by quantifying the externalities (both greenhouse gases and local air pollution) generated by driving these vehicles," the authors write.