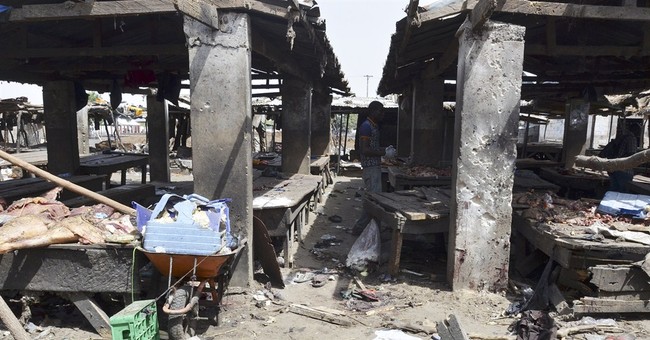 Ahmed Ajimi, a fighter in the anti-Boko Haram Nigerian Vigilante Group, said many victims of Wednesday night's attacks were farmers who had recently returned home after soldiers earlier this year forced the extremists out of the area where they had declared an Islamic caliphate.

Now they are refugees again, with many survivors suffering gunshot wounds and burns, Ajimi told The Associated Press in a telephone call from Biu town, 60 miles west of the destroyed villages.

Hit-and-run attacks and suicide bombings have continued. Boko Haram last week denied Nigerian military reports that militant fighters are hemmed into the Sambisa Forest and claimed its fighters still hold towns hundreds of miles away. There was no way to verify the competing claims.

"It was really horrifying," Ajimi said, describing the insurgents shooting from the back of pickup trucks and hurling firebombs that quickly set ablaze the thatched roofs of scores of huts.

He said he spent the night in the bush and returned on Thursday to help bury 37 corpses.

Unfortunately, this is becoming a regular occurrence in Nigeria, as Boko Haram continues to terrorize the country. It should also be noted that when Hillary Clinton was Secretary of State, she didn't label Boko Haram as a terrorist group, which likely had to do with a top Nigerian official donating millions of dollars to the Clinton Foundation.