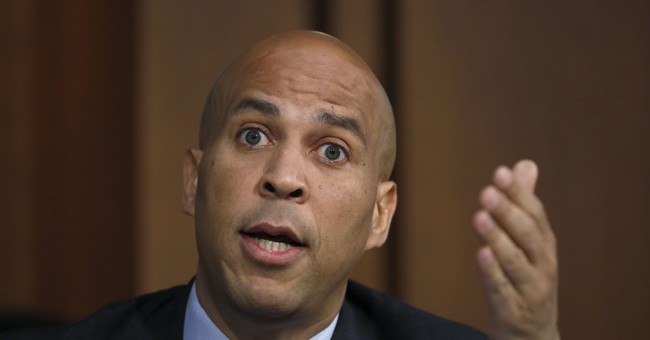 It looks like Spartacus, aka Sen. Cory Booker (D-NJ), just got the incentive he needs to officially announce a 2020 presidential bid, as New Jersey's Democratic Gov. Phil Murphy just made a potential presidential run a whole lot more enticing.

On Thursday, Gov. Murphy signed a piece of legislation that people are coining "Cory Booker's Law." The law will allow Sen. Booker to run for president and seek re-election in the Senate simultaneously.

Nj.com has more on the legislation:

Murphy gave final approval to legislation aptly nicknamed "Cory Booker's Law." It will will allow Booker, the New Jersey Democrat, to appear on a November ballot both as a candidate for president or vice president, and for U.S. Senate or House.

Current law doesn't prevent anyone from doing so, but the new law 'clarifies' that the prohibition on holding more than one state elective office does not apply to running for Congress and the White House simultaneously.

Of course, the new measure doesn't only apply to Booker. Others could take advantage of it.

This legislation sets up a win-win scenario for the New Jersey senator, as he now has a fallback plan.

The Democratic primaries are expected to be much more competitive this time around, as a laundry list of people will be throwing their hat into the ring in the hopes of becoming the Democratic Party's next presidential nominee and taking on President Trump in 2020. If Sen. Booker fails to win the Democratic Party's nomination for president, or if he's nominated but fails to defeat the president in the general election, he won't have to worry about job security or running out of time to get his name on the ballot as a Senate candidate.

Not every state allows candidates this privilege.

During the 2016 Presidential Election, due to Florida state law, Sen. Marco Rubio (R-FL) was unable to run for the presidency and seek re-election for his Senate seat. The Wall Street Journal noted in 2014 that, "Florida bars a candidate from running for two offices at once. Mr. Rubio has said he would abide by that law and give up his Senate seat if he runs for president..."

However, after losing his home state on Super Tuesday 2016 and realizing that becoming the Republican nominee for president was out of reach, Sen. Rubio dropped out of the presidential race and reversed course on his statement saying he would either be president or return to civilian life. Sen. Rubio successfully had his name placed on Florida's ballot as a Senate candidate and ultimately won re-election, defeating his Democratic opponent, Patrick Murphy, by nearly eight points.

If Booker does become the next Democratic presidential nominee, we don't think Trump will be too worried.  Before even winning the presidency in 2016, Trump tweeted about Sen. Booker, saying that if he "is the future of the Democratic Party, they have no future."

If Cory Booker is the future of the Democratic Party, they have no future! I know more about Cory than he knows about himself.

Neither Booker nor President Trump has been shy about criticizing one another. Booker has called for the president's resignation and Trump has called out Booker during one of his rallies, saying, "[Booker] ran Newark, New Jersey into the ground and now he wants to be president."