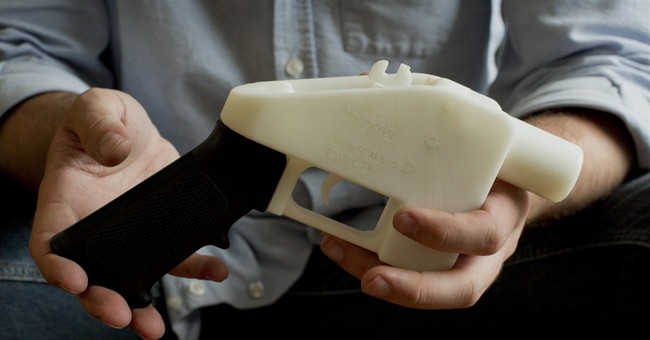 The Second Amendment Foundation (SAF) and Defense Distributed, the company set to release blue prints for people to create firearms with a 3-D printer, on Sunday filed a lawsuit against New Jersey's Attorney General and Los Angeles' City Attorney.

The decision comes after Cody Wilson, the owner of Defense Distributed, received a cease and desist letter from New Jersey's Attorney General (emphasis mine):

You are directed to cease and desist from publishing printable-gun computer files for use by New Jersey residents. The files you plan to publish offer individuals, including criminals, codes that they can use to create untraceable firearms—and even to make assault weapons that are illegal in my state. These computer codes are a threat to public safety, and posting them violates New Jersey's public nuisance and negligence laws. If you do not halt your efforts to proceed with publication, I will bring legal action against your company before August 1, 2018.

The computer files that you plan to publish will undermine the public safety of New Jersey residents These files will allow anyone with a 3-D printer to download your code and create a fully operational gun. More than that, the codes you plan to publish will enable individuals to print assault weapons that are illegal in New Jersey. And because printed guns would not have serial numbers, they would not be traceable by law enforcement. Worst of all, you are going to make the codes available to everyone – regardless of age, criminal status, or history of mental illness. That would undermine New Jersey's comprehensive scheme for keeping guns out of dangerous criminal's hands, and it would undermine the safety of our residents.

Not only are your codes dangerous, but posting them would also be illegal. New Jersey's law is clear: an individual who interferes with public health, safety, peace, and comfort violates our public nuisance law. See James v. Arms Tech., Inc., 359 N.J. Super. 291, 329-33 (App. Div. 2003). As New Jersey courts have held, "[n]o one can seriously debate" that regulated guns are "dangerous instrumentalities" and thus implicate our public nuisance law. Id. at 320. So when a group of manufacturers "flood[ed] the gun market" through a high volume of sales, while failing to develop "reasonable safeguards over the distribution scheme" and "refus[ing] to oversee or supervise the control of handgun distribution in order to prevent the foreseeable channeling of guns to such an illegal market," New Jersey courts found they could be held responsible when their actions "facilitate[d] the illegal sale of weapons to criminals and otherwise unlawful users." Id. at 312. That is what your actions will do as well—make do-it-yourself guns available to anyone, even if the individuals are prohibited from owning guns because of prior convictions, history of mental illness, or history of domestic violence, even if the weapons they print are illegal in my state, and even if they plan to use their weapons to further crimes and acts of violence. Because your actions will flood the illegal firearms market and pose a direct threat to the public safety of my state, they constitute a public nuisance.

Worse still, your comments make clear that you hope your actions will undermine all the efforts of states like New Jersey to keep guns out of criminals' hands. You have states, "All this Parkland stuff, the students, all these dreams of 'common sense gun reforms'? No. The internet will serve guns, the gun is downloadable." You have also stated, "I'm not worried about public safety." And on July 10, 2018, you tweeted a photo of a gravestone engraved with the words "American Gun Reform." These comments show that you have no intention of precluding your printable-gun computer files, including designs for assault weapons, from winding up in the hands of criminals, minors, and the mentally ill. Not only does that reveal a lack of regard for safety, but it also shows that your interference with the public's health and safety is intentional and per se unreasonable. James, 359. N.J. Super. at 330.

Finally, your widespread dissemination of printable-gun computer files is negligent because it encourages an illegal gun market, which will foreseeably lead to increased crime and violence in New Jersey, and which will lead to an increase in expenditure of public funds for combatting crime and protecting our resident's health. See id. at 308-24 (finding a legally valid negligence claim against some manufacturers of guns) that flooded the illegal market). Your planned method of making codes available and your public comments show that you are ignoring and violating your duty. By broadly sharing an inherently dangerous product, you should reasonably foresee the resulting governmental and public costs and must bear them. Id. at 323-24

As the chief law enforcement officer for New Jersey, I demand that you halt publication of the printable-gun computer files. Should you fail to comply with this letter, my Office will initiate legal action barring you from publishing these files from August 1, 2018.

Yesterday, @DefDist sued me for trying to keep untraceable guns out of the hands of terrorists and criminals. So be it. I’m not backing down on public safety. https://t.co/ayaF8AzWHM

Alan Gottlieb, Founder and Executive Director of the SAF, said this is a First Amendment issue.

“What Grewal and Feuer are attempting is an unconstitutional exercise of prior restraint," Gottlieb said in a statement. “They are trying to prevent Defense Distributed and its founder, Cody Wilson, from exercising free speech under color of law.”

“We have the right to publish this information and now the New Jersey Attorney General and Los Angeles city attorney can pay for it," Wilson added.

“This is quickly turning into a classic First Amendment case,” Gottlieb said. “People publish all sorts of information online, but because this case involves technical information on production of firearm components on a 3-D printer, these anti-rights officials are trying to squelch it. We cannot allow this to happen. You cannot exercise the right to keep and bear arms without being able to buy or make your own firearm."

According to a tweet from Wilson, 21 Attorney Generals are now suing him:

I am now being sued by at least 21 state attorneys general. If you want your Second Amendment online, THIS is the fight. Join me: https://t.co/vEBBktsKS6