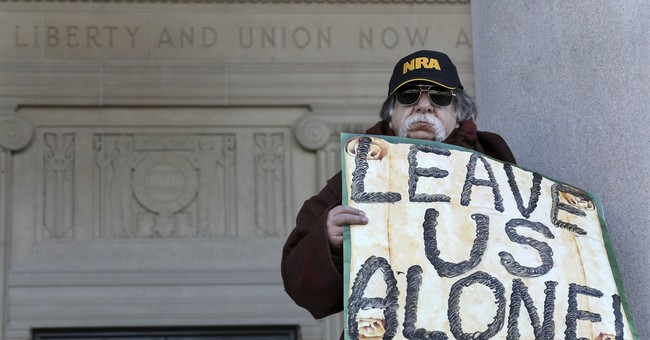 Everytown for Gun Safety president John Feinblatt penned an Op-Ed in The Daily News detailing how (he believes) the National Rifle Association (NRA) is on a losing streak. Feinblatt comes to a number of conclusions that he attempts to present as facts, but really, they're nothing shy of hopes and dreams.

One of Feinblatt's biggest reasons for believing there's a changing tide in Americans' views on guns and the NRA: corporate sponsors no longer offering discounts to NRA members.

They're losing corporate support right and left. Companies like Hertz, Delta and Bank of Omaha have ended partnerships with the NRA because they no longer want to be associated with such a toxic brand. Other companies, like Dick's Sporting Goods and Citigroup, are playing an active role in the push to create a more responsible gun marketplace. Businesses live or die on their ability to respond to customers — so when you see them dropping the NRA like a hot potato, it's a reliable indicator that America is experiencing a major shift on guns.

First, and foremost, it's important to remember one thing: no one forced businesses to provide NRA members a discount. These businesses willingly chose to be partners with the NRA. They made the decision to reward gun owners for being members of the NRA. No one twisted their arm and told them they absolutely, unequivocally

2. He believes the majority of Americans view the NRA unfavorably.

Feinblatt seems to think the majority of Americans view the NRA unfavorably, yet he fails to mention where how he came to that conclusion. He does, however, provide this statistic but doesn't mention where (or how) he obtained it:

And on March 24, more than 2 million people in cities as big as New York and as small as Show Low, Arizona (population: 12,000) marched in support of gun safety — and in opposition to the NRA's "guns everywhere" agenda.

Just because a handful of people in a small town came together for a gun control rally doesn't mean that "the majority of Americans" suddenly oppose the NRA. The two are not cyclical.

1. He assumes gun owners will "go away."

Mr. Feinblatt, did you not learn anything during the 2016 presidential elections? As much as gun control advocates hate admitting it, it's something you can't deny: gun owners knock on doors, we make phone calls urging our friends and family to vote for our candidate, but most importantly, we show up to the polls. And we vote.

Gun owners are passionate about the Second Amendment. You know why? Because we know what's at stake. We know history and we refuse to let other countries' past become our future.

Us law-abiding gun owners know that our Founding Fathers placed an emphasis on the Second Amendment because they feared a tyrannical government. When gun control advocates attempt to disarm us, they're going against everything our Founding Fathers wanted and envisioned for America.