Where Drew Brees and Tom Brady Will Meet Next...But It'll Be Awhile 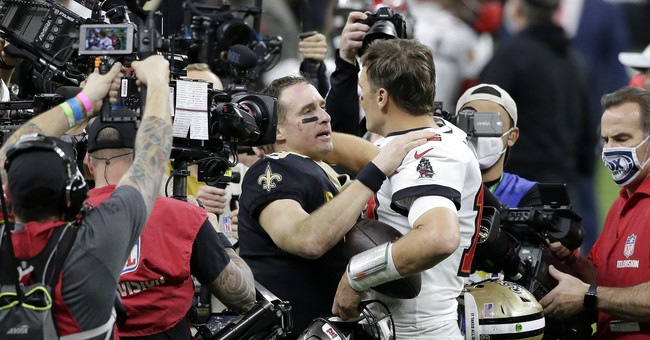 When Tom Brady was Tampa Bay-bound, maybe there were some who thought there could be epic duels between the now-seven-time Super Bowl champion and Drew Brees. Tampa Bay and the New Orleans Saints are now the top dogs in the NFC South. Brees and Brady meeting twice a season? There could be some great football. Well, maybe not. The Saints swept the Buccaneers in the 2020 regular season in which they went 12-4. They won the division, but Brady and his Bucs hit their stride late in the season and toppled the Saints in the divisional round of the playoffs. It’s another year of heartbreak. In fact, there's been a lot of heartbreak for Saints fans in the playoffs recently.

And this isn’t the first time that an opponent who swept their divisional rival ended up getting speared in the playoffs. The New York Giants got rolled by Dallas in the 2007 regular season, a year where the 13-3 Cowboys probably should have gone to the Super Bowl. They didn’t. Giants’ cornerback R. W. McQuarters intercepted Tony Romo with seconds left to go, sealing their fate. Giants went onto upset Brett Favre’s Packers and then shocked the world by slaying Brady in Super Bowl 42. Ironically, like the Giants, Brady’s 2020 Bucs was added to the list of the few NFL wild card teams to reach a Super Bowl game and win it

Cool Brees should have more Super Bowl rings. He only has one ring, but he’s a quarterback who’s lasted 20 years in a game that notoriously short regarding longevity in professional sports. Now, he's riding off into retirement.

Drew Brees has spent the last 20 years racking up A LOT of NFL and Saints team records. ?? ??

Where does he stand in the record books as he rides off into retirement? This chart can help — and yes, we needed a whole newspaper page to fit all of the ??'s accolades. pic.twitter.com/8GqF3ZwGzZ

His accolades are many. He has the most pass completions in a season, the most 5,000 passing yard seasons, and over 80,000 career passing yards. He’s Canton-bound. Tom Brady is also bound for the Hall of Fame when he retires. So, in a way, Brees and Brady will meet again somewhat by being enshrined among the hall of the greatest to ever play football. It is well that this happens, but not for a long time. Brady’s Bucs could be a team that repeats in 2021. And the man has shown no signs of wanting to retire just yet.

For the Saints, it could be Jameis Winston taking the torch.

"If I could define leadership, it would be Drew Brees... He's been playing my whole life. Amazing career, amazing person. I'm excited to see what he does next."

Jameis Winston gets emotional talking about the impact Drew Brees had on him as a QB and a man. "He doesn't even know how much he means to me and my family.”

This clip is worth your time.