The Tragic End to Deshone Kizer's NFL Career...And It Began Where QBs Usually Go to Die 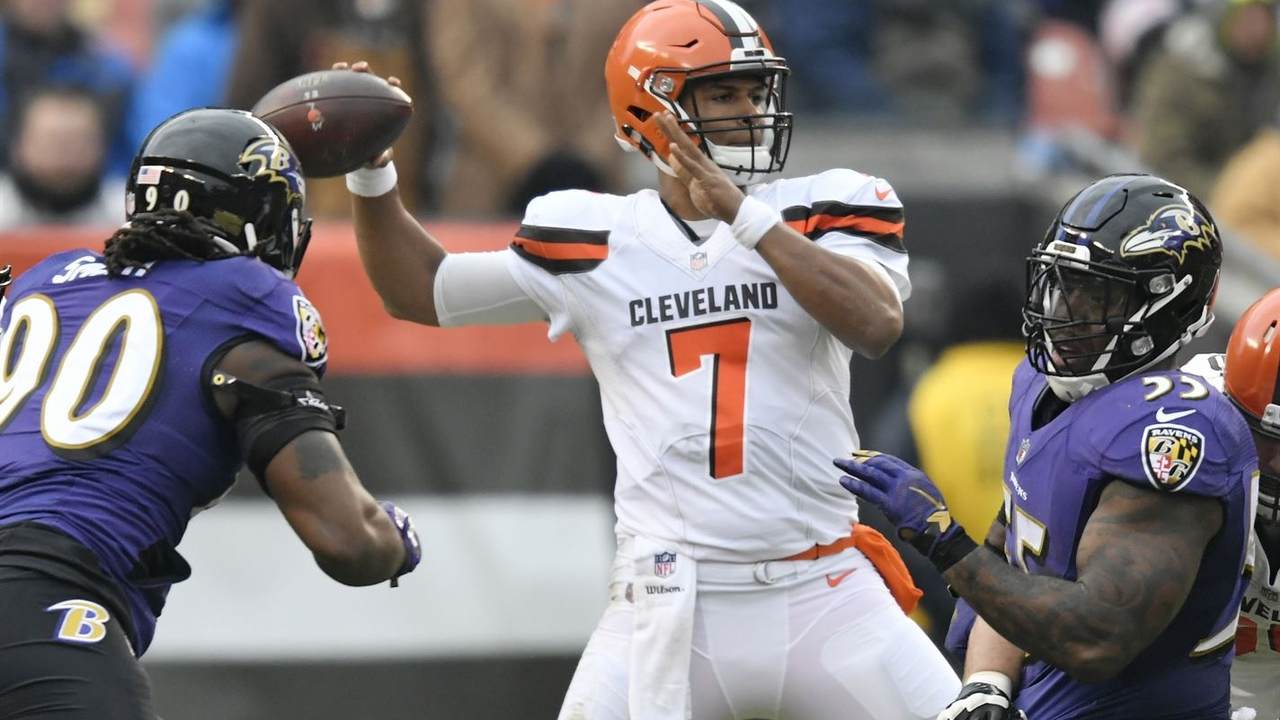 There is a reason why people say the real initials for the National Football League stand for "not for long." It's a brutal sport that often chews players up and spits them out after a couple of seasons. In fact, the average NFL career is just that: three seasons. So, the axiom of NFL players not lasting long rings true. And that goes especially for former Cleveland Browns quarterback Deshone Kizer.

Who? Agreed. It's a fair question. As a die-hard (and long-suffering) New York Giants fan, I couldn't care less about the Browns. It's Cleveland. It's the American Football Conference. If you're a Steelers, Ravens, or Bengals fan, I defer to you regarding how you feel about your division rival. But there is a tragic history in Cleveland concerning quarterbacks. This is the place where they go to die. Sports Illustrated has a pretty good piece about how Kizer, drafted in the second round of the 2017 draft, was never given a chance to succeed. Was he a Super Bowl-caliber QB? Probably not, but certainly not one whose career would extinguish after three seasons, given how quarterbacks are protected by the new, improved, and safety-oriented NFL.

You can't tackle a QB without putting a featherbed next to him, and even then, roughing the passer might be called. Re-watching the greatest upset in all of professional sports, Super Bowl 42, there is no way roughing the passer would not be called in today's NFL. In that game, the Giants' nasty defense executed a relentless pass rush that ended with Tom Brady being hit 19 times, five of which ended with him being sacked, the most punishment he took out of any game that season. The point is with the latest medical research on concussions and Chronic Traumatic Encephalopathy (CTE), especially with owners doling out contracts to QBs that soar into the $140 million-dollar range (or more), safety is going to take a front seat.

Kizer wasn't bad, but he wasn't awful. He could have had a decent career as a back-up. Who knows? What is true is that at Cleveland, he was thrown into the deep end with no support system. This truly was baptism by fire. The team got rid of veteran QBs who could have mentored the young Kizer, allowed him to get accustomed to the NFL, and, most of all, soak it all in before being given a shot at helming a franchise. Instead, now-ex-head coach Hue Jackson decided to make him a franchise QB, and the results were disastrous: Browns went 0-16 for the 2017 season. Kizer was traded to the Green Bay Packers, and then he was offloaded to the Las Vegas Raiders, who released him earlier this month. He's followed the same path as another Notre Dame QB, Brady Quinn, who was drafted in the first-round back in 2007 before being tossed around multiple franchises prior to his exodus from the sport. The Browns are where QBs go to die, but for Kizer, that fate was sealed with accelerant poured on it by Jackson's utterly abysmal decisions. Here's what SI wrote regarding this dumpster fire of a franchise and its 2017 season:

It was probably still early for him, but it was far more reasonable. He wasn't ready to be in the NFL. He wasn't particularly good in college at Notre Dame. Kizer had great size, mobility and tools for the position including a strong arm and some truly special throws along the way that made him an attractive prospect. Kizer was selected by a team that seemed to understand where he was in his development, save for the head coach, Hue Jackson.

When he was drafted, Sashi Brown, the Executive Vice President of the team at the time noted the team intended to let Kizer sit and develop, trying to put him in a position to succeed. But as minicamps and training camp got going, Hue Jackson kept talking up Kizer's ability and progress, which proved to be hollow excuses to tell everyone how great he was as a coach.

The team released Robert Griffin III, the team's veteran quarterback option they signed the year before who missed much of the year due to injury. Josh McCown was released as Jackson thought he'd be a really great coach, but didn't think he was good enough to play any longer. McCown signed with the New York Jets and had a year the Browns would've killed for in 2017. Efficient, he helped a pretty bad Jets team win five games of the thirteen games he played that year.

Last but not least, the Browns let go of Brock Osweiler. Osweiler was acquired in a trade with the Houston Texans as a massive salary dump that allowed the Browns to move up from the fourth round of the 2018 NFL Draft to the second round. Osweiler was already fully paid for the 2017 season, regardless of what the Browns would do. Cutting him didn't save the team a dime and keeping him wouldn't have cost them a dollar more. Nevertheless, cut.

Despite the fact he had a very young, very raw quarterback, Jackson and the Browns released any meaningful potential support system within the quarterback room in the form of veterans, moving on from Griffin, McCown and Osweiler in favor of second-year quarterbacks Cody Kessler and Kevin Hogan. Kessler was a third round pick by the Browns in 2016 and Hogan was a fifth round pick in 2016, picked by the Kansas City Chiefs, who they had waived.

Jackson believed in his ability to teach and coach Kizer so much that he thought he was all that Kizer needed. In some ways, it seemed Jackson wanted his voice to be the only one they heard. David Lee, the quarterbacks coach of the Browns in 2017 came out and said he thought Kizer wasn't ready. Along with the front office, one of Jackson's own assistants didn't think Kizer was ready to play. Jackson ignored them because he knew better.

Hue Jackson: "If I'm worth my salt as a coach, I'll get the most out of DeShone Kizer." #Browns pic.twitter.com/KkVwupnVF0

Well, he didn't. The record says it all, and Huey was fired by the Browns in 2018. In a little over two years with the team, Hue "because I know better" Jackson amassed a record of 3-36-1.

Now, it's quite possible, and SI makes a note of this, that maybe Kizer would still be a failure even with a support system, but we'll never know that. What we do know is that this kid was offered up to the wolves for slaughter. With nothing around you except some coach who can't win games, how could you succeed? And what about Baker Mayfield, you say? Well, he's certainly fared better on the field. His completion percentage dipped from his rookie season, but he amassed more passing yards. But the team did worse, finishing 6-10 for 2019 compared to 7-8-1, that tie costing the Pittsburgh Steelers a trip to the postseason. Head Coach Freddie Kitchens was fired. He's now the tight ends coach for the New York Giants, which is probably a better fit for him and General Manager John Dorsey, who garnered praise for the Odell Beckham trade from New York, and was also fired. It's a season where the Browns might be able to prove their doubters wrong. They acquired OBJ, have Baker under center, with running back Nick Chubb, another wideout threat with Jarvis Landry, defensive first-round talent Myles Garrett, tight end David Njoku, and another stud running back in Kareem Hunt, who had to serve an eight-game suspension over a domestic violence dispute. The team had weapons, and they just couldn't make it work. There was Super Bowl talk around this team. There was also talk about them being favorites to take the division. Again, the fires of Hades engulfed the team with drama and other issues handicapping the squad.

It seems Cleveland is truly football hell. Do they just need a solid head coach? It's a no brainer piece of commentary, but the one thing that New England Patriots head coach Bill Belichick and University of Alabama head coach Nick Saban said in the HBO special "The Art of Coaching," which is about the relationship these two men have with each other and the game of football, is that great players can never overcome bad coaching. Hue Jackson appears to be one of the worst. Belichick and Saban emerged from the ashes of Cleveland. Bill was head coach while Saban served as defensive coordinator in the early 1990s, to become some of the best football minds to ever set foot on the field.

Meanwhile, Hue Jackson proved to be one of the very worst, and it showed. For Kizer and Quinn, it's over. For Baker, let's just pray for the best. He's talented. I like watching him, but he's going through two administrations in two years. He could be a success, but the history of this nightmare franchise could be keeping him grounded. If Baker does go down as a shinier failure, then there really is no hope for any QB going to Cleveland is there?