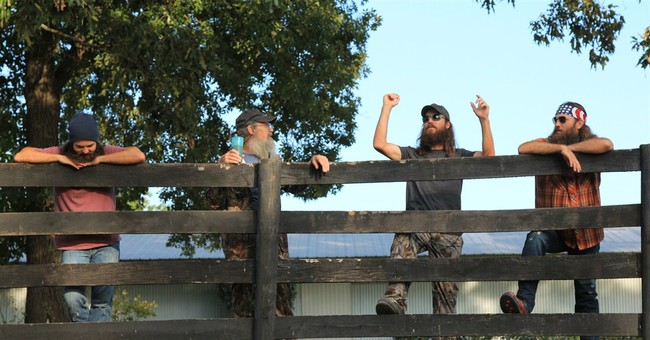 The Robertson family was shaken up last week when a man fired several shots at Willie Robertson’s estate.

“Thank you so much for all of your prayers for our family,' Korie Robertson, Willie's wife, wrote on Monday. “We are all safe and sound and feeling profoundly grateful for God's protection over us! Yes, the news reports are true, we had a drive-by shooting at our home on Friday, it was scary and dangerously close, but thanks to God no one was hurt.”

Daniel King Jr, 38, was charged with one count of aggravated assault by drive-by shooting, the Ouachita Parish Sheriff's Office said on Sunday. He allegedly fired eight to 10 shots at the family’s estate, which has several properties on it. Two of the homes were hit, with one entering the window of John Luke's home, where his wife and infant also live. The three were issued orders of protection from the suspect until April 27, 2022.

“It shook us all up of course, but we are just so thankful everyone in our family is okay,” Sadie Robertson said. “The timing of where we were at the time was crazy protection because we had all just gone inside. We have been resting on Psalm 91 and each other's gratitude for all being okay. Thank you for your prayers.”

hi, yes the news is true if you’ve seen it. We had someone shoot at our property. Just wanted to say we are all okay. It shook us all up of course, but we are just so thankful everyone in our family is okay. Especially after one of the bullets flew through the window of my brothers home... The timing of where we were at the time was crazy protection because we had all just gone inside. We have been resting on Psalm 91 and each other’s gratitude for all being okay ?? thank you for your prayers.

“God was watching over us,” he told KTVE-TV. “Like I said, just a few minutes before, we were all outside; kids outside, grand kids outside, right where the bullets came through.”

“God is good and we will keep serving him,” he added.

Jase Robertson, his brother Al, and father Phil described the incident and what was going through their minds on Jase’s “Unashamed” podcast Wednesday.

The elder Robertson said he thought twice about making the rash decision to investigate and return fire.

“But then I stopped. I said, 'Wait a minute, I'm behind a locked gate. If they crash the gate, they'll be here in just a little bit,” he said. “I said, '[If] I go up there and it's a bunch of drunk teenagers shooting at the signs, shooting my gate [and] I get the AR and kill them all – I probably would end up on the wrong side of this thing.’ They're not at my house. They are on the side of the road, and a bunch of drunk teenagers who drank too much beer and [who are] somebody's children. And I'm sitting there and I kill all of them. I'm like, ‘That just won't play well.’” […]

Jase said he rationalized in his mind the best approach to take and simply made a judgment call similar to Phil’s that “I’m not going to sit here.”

“The difference between you and me is when I got word, I was within arm's reach of an AR-15 and it's that way at all times,” to which Jase responded, “I realize it, Phil. I used to think you were paranoid, but now, you were prepared. You were right.” (FoxNews.com)

Jase wondered about the shooter’s motivations but, regardless, vowed to “share Jesus” with him.

King told authorities he was drinking vodka at the time.