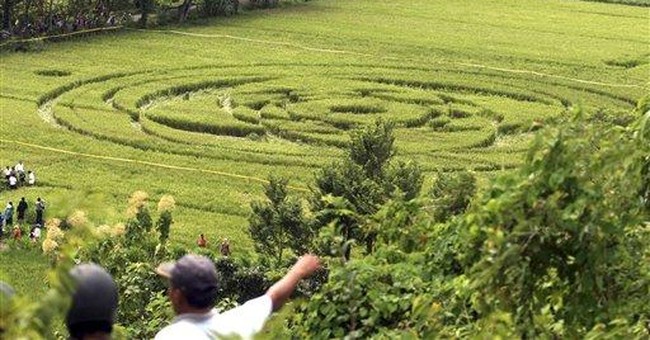 The new History Channel drama Project Blue Book takes a look back at a series of U.S. Air Force investigations into unidentified flying objects (better known as UFOs) conducted in the 1950s and 1960s. Starring Aiden Gillen as Dr. Allen Hynek, the show — which notes that many of the cases are based on real events — introduces Hynek as an astrophysics professor intrigued by this new field of research.

The show, inspired by Hynek’s research, begins with an Air Force pilot witnessing a strange occurrence during a routine flight. Not only does he see something peculiar in the sky, his plane also suffers damages from an attack. Officials from the Air Force doubt aspects of his story and bring in Dr. Hynek as an academic who will hopefully discount the pilot’s narrative. Hynek examines the plane, noting the uniqueness of the damages and begins to wonder if the pilot is telling the truth.

Air Force Captain Michael Quinn (Michael Malarkey), who teams up Hynek for the investigation, seeks to dissuade Hynek of his beliefs. Quinn offers alternative theories, hoping Hynek will relent. As Hynek continues research into the subject though, he discovers more questions about what’s really out there.

The show’s subject matter provides a certain level of intrigue but that’s oftentimes undercut by its dry approach to the material. Similar to The X-Files, the program’s first episode introduces characters with diametrically opposed viewpoints. Hynek, who might be a skeptic at first, ends the first episode as a man who starts questioning the existence of unidentified flying objects. Quinn, on the other hand, remains skeptical.

Of course, a group of military officials — who seem to be overseeing Hynek’s work from afar — are presented as part of a grand conspiracy. With films depicting alien life forms, these officials want to stem any public talk about the existence of UFOs. .“[President] Truman assembled this group to control the narrative on this issue,” one official states, “not Hollywood.”

These officials may or may not be believers but they want to silence those with firsthand experiences who could alert the public to a danger coming from the skies. In addition to these agents working from governmental offices, there are also spies looking into Hynek’s research.

One of the more subtle elements of the first episode is the fact that at the time of this investigation, the United States was engaged in a space war with the Soviet Union. It’s likely that the Soviets will play a key role in this drama as the show continues but not much is made of that relationship in the first episode.

Aidan Gillen, best known as the villainous Littlefinger on Game of Thrones, does an admirable job with the material but the script doesn’t really allow his character to really stand out. Hynek is a husband, a father and a scientist but for much of the first episode, he’s simply defined by his work as a scientist. His wife Mimi (Laura Mennell) also isn’t given much to do in the first episode.

There’s a lot of stories to unpack on this topic (the Project Blue Book studies lasted from 1952 to 1969) but for the dramatic recreation to work, there needs to be a strong story and strong characters to go along with it. Perhaps the show will build its world in the next few episodes but the first episode lacks the drive to make this show as interesting as the subject matter it’s exploring.