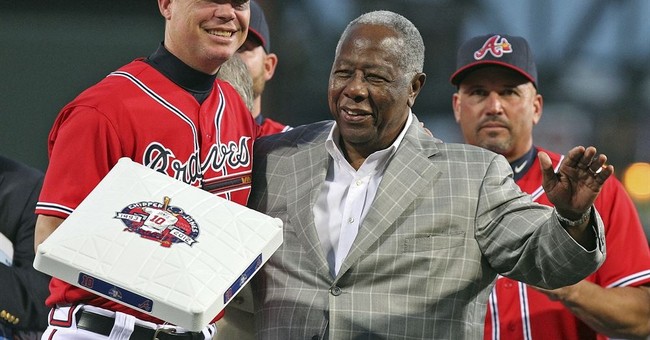 The baseball world lost one of the greats on Friday. Hank Aaron, more endearingly known as "Hammerin' Hank," has passed away at the age of 86. The former Atlanta Braves player and Hall of Famer is known for beating Babe Ruth's 33-year home run record in 1974.

We are devastated by the passing of Hammerin’ Hank Aaron, one of the greatest players and people in the history of our game. He was 86. pic.twitter.com/bCvLOydGBZ

Aaron began his baseball career in 1954 with the Milwaukee Braves. The team moved to Atlanta in 1966. When Aaron hit his 715th home run in 1974, he broke Babe Ruth's record. Ruth's record held for 33 years and many thought it could never be broken. But his accomplishment was unfortunately accompanied by some racist hate mail and death threats. So when two young, white fans, later identified as Britt Gaston and Cliff Courtenay, rushed the field after Aaron hit his record breaking homer, audiences held their breath. As it turned out, they just wanted to congratulate him. And Aaron has reunited with the men a few times since.

This is probably my favorite single moment in sports history. Aaron had received death threats as he neared Ruth’s record. I can only imagine what was going through people’s minds as they saw two white guys jump the fence and rush towards him. Makes me tear up every time. RIP. pic.twitter.com/ifglxgsAia

Aaron retired from baseball in 1976. Since then, he'd served as an executive for the Braves. Barry Bonds would later break Aaron's record with 762 home runs.

Fans and some famous friends remembered the legendary player with some heartfelt messages and memories.

I can’t imagine what Hank Aaron went through in his lifetime. He had every right to be angry or militant.....but never was! He spread his grace on everything and every one he came in contact with. Epitome of class and integrity. RIP Henry Aaron! #HammerinHank

Rest in Peace to American hero, icon, and Hall of Famer Hank Aaron. I still remember where I was back in the day when he set the record, at that time, to become the home run all time leader. While a legendary athlete, Hank Aaron was also an extraordinary businessman...