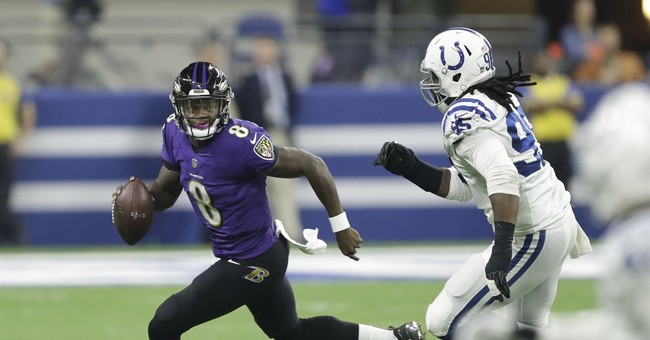 In the second half of Saturday's playoff matchup between the Buffalo Bills and the Baltimore Ravens, the Ravens quarterback Lamar Jackson took a nasty hit on the turf. It turned out to be a game-ending concussion.

There was a smattering of callous cheers that Jackson had left the game and all but guaranteed the Bills the win. But the larger response to Jackson's injury was totally a class act. Bills fans immediately began donating to Jackson's favorite charity, "Blessings in a Backpack."

Bills fans started donating to Lamar Jackson’s favorite charity overnight after he left the AFC divisional game with a concussion and the Ravens lost.

"Blessings in a Backpack," as described by ESPN, is a mission that helps feed needful elementary school children on the weekends. Representatives say the charity has received tens of thousands of dollars since Saturday's game.

"It started around 11:30 last night and our donation box just started flooding with donations from Bills fans for Lamar. It's just been overwhelming -- in the best possible way," said Nikki Grizzle of "Blessings in a Backpack," whose mission is to mobilize communities, individuals and resources to provide food on the weekends for elementary school children across America who might otherwise go hungry.

According to Grizzle, as of noon ET on Sunday, 2,500 individual donations have been received, totaling over $75,000. (ESPN)

The Baltimore Ravens and "Blessings in a Backpack" showed the Bills Mafia their gratitude.

Thank you, @Knop917 for inspiring #BillsMafia to give to Blessings in a Backpack in honor of @Lj_era8! https://t.co/g4gFqHtkOr

This isn't the first time the Bills Mafia has practiced some philanthropy. When quarterback Josh Allen's grandma Patricia passed away last year, fans responded by raising over $1 million for Oishei Children's Hospital, after which the hospital set up the Patricia Allen Fund.

The Bills beat the Ravens by 17-3 on Saturday, thanks in part to some 3rd quarter heroics by cornerback Taron Johnson, who pulled off a 102-yard interception slash touchdown. The team now heads to the AFC Championship Game for the first time since 1993. Should they win that game, they'll be headed to Tampa.