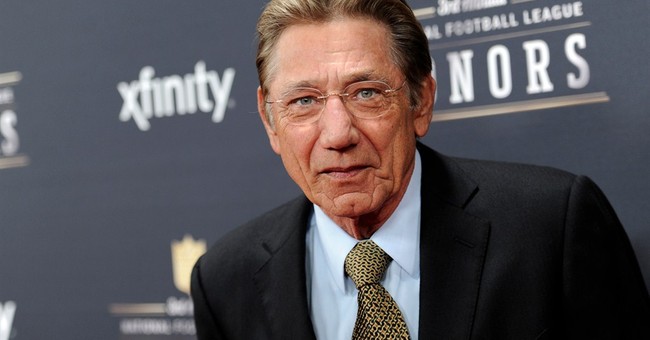 Everyone is struggling to maintain self-care in the coronavirus-induced isolation. Even NFL star Joe Namath.

Namath is a former New York Jet and the Superbowl III MVP. He was one of the most popular athletes in the country, thanks both to his talent and infectious personality. But his life and career haven't been all fun and games. Now in his seventies, Namath has been very candid about his past addiction to alcohol. After his divorce from Deborah Mays, Namath said he would sometimes spend entire days drinking. In his book, "All the Way: My Life in Four Quarters," the former football star said he'd probably be dead right now if he hadn't finally put the bottle(s) down.

It wasn't until he embarrassed himself and his family on live television that he decided to turn his life around. As many people vividly recall, an inebriated Namath was being interviewed by ESPN anchor Suzy Kolber on the sidelines of a football game in 2003 when he blurted out that he "wanted to kiss her." He was mortified, but in retrospect he considered the incident a "blessing in disguise" because he said he hasn't touched a drink since.

Having defeated those demons, Namath was well qualified to offer some advice to others who may be battling addiction or depression during the COVID-19 quarantine. In a conversation on Fox Business Network's "Varney & Co.," host Stuart Varney asked Namath to provide some words of encouragement.

“We all need help," Namath said. "You’re not in this alone. What you’re going through, please, share it with someone. Get some help. If you think you can’t, you won’t do it, you know what I’m saying? You think you’re tied into something, you’re addicted to something. Think bigger, think more outside of just you. You know people love you, you have loves, you can beat this thing. You can beat the addiction, whatever it is with help, with guidance, with some reinforcement, man. So please share it with somebody, what you’re going through.”

In sum, don't go through your battles alone.

Namath, who was sporting his New York Jets jersey during the Fox Business interview, predicted that fans may get some sort of football season this fall. Although he warned it may start a bit late or feature empty stands.