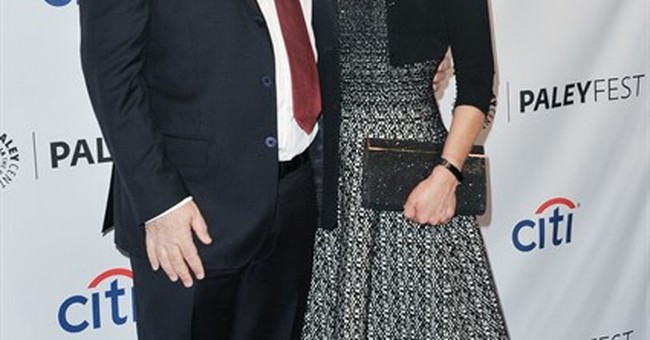 "Evil" is not your typical network television show. When's the last time you turned on CBS in primetime and saw an exorcism? Or a 9-year-old psychopath? Well, get used to it. Because show creators Robert and Michelle King's unique psychological thriller has just been picked up for a second season.

"Evil" follows the disturbing path of female psychologist Kristen Bouchard, played by Katja Herbers, and Catholic priest-in-training David Acosta (Mike Colter), as the pair tries to analyze demonic possessions, exorcisms, and a whole lot of other "evil" happenings. It's dark, yet comedic tone makes it unlike any other drama on television at the moment.

While there probably "should" have been more drama involved in CBS's decision to green light their dark pitch, the Kings explained in a Townhall interview that it was fairly straightforward. The network probably saw their show as "a way to open up a standard audience to a new genre," the talented team mused. CBS may have also considered the Kings' successful track record, considering they're the creative minds behind "The Good Wife" and "The Good Fight."

And their pitch wasn't completely out of left field, either. "The X-Files" dealt with some supernatural storylines, too. Just as in "X-Files," the female agent in "Evil" is the skeptic, while the male investigator has some modicum of faith.

The Kings, though, prefer to describe "Evil" as a mix of "Mindhunter" and "Silence of the Lambs." And, more often than not, they take inspiration from filmmaker David Lynch, who directed and/or produced the thrilling mind benders "Twin Peaks" and "Eraserhead."

"We're always referring to these moments that seem to come out of nightmares that you can't explain," the Kings said.

But it's a much different environment during filming. In fact, Michelle said she was "surprised" to hear how scary some viewers found "Evil."

"When you're inside making it, you see the creature without its head, eating snacks at lunch," she joked.

Robert admitted he went into parental protective mode over the four young actresses on the show who play Bouchard's daughters.

"You're always worried like, are you hurting them by putting them in these scary situations?" he shared. "But the way it's shot and the way they see the monster, they really made friends with him so it really takes all the scares out of him."

I posed one more "simple" challenge to the Kings: Can you explain the nature of evil?

"I believe evil comes from the fallen nature of man," Robert said. "I do wonder how much of it is people choosing to make evil choices or how much they inherit evil choices from the culture or from their parents. I guess I am a little torn between the supernatural and the psychological, but I lean towards supernatural more."

Michelle, who pivoted away from the supernatural, says she tends to rely more on "science and psychology."