How the 'Roseanne' Spinoff Will Work, According to John Goodman 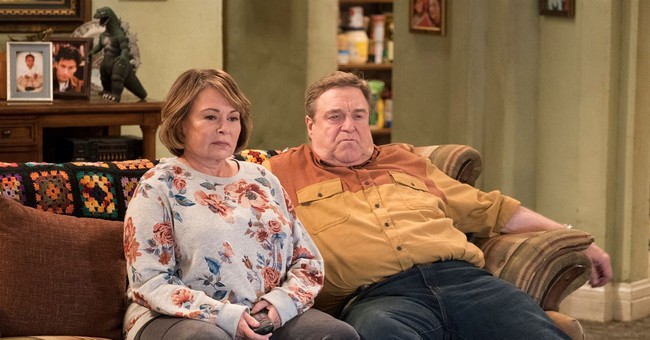 The "Roseanne" spinoff "The Conners" is going forward without its namesake. Roseanne Barr tweeted some very controversial remarks about former President Obama aide Valerie Jarrett in May and lost ABC's confidence, not to mention a few fans. The show plans to proceed by killing off the title character, according to John Goodman, who plays Roseanne's husband Dan.

In the spinoff of the reboot, Goodman predicted his character on "The Conners" will be “mopey and sad because his wife’s dead.”

In May, Barr tweeted, "Muslim brotherhood & planet of the apes had a baby=vj," in reference to Jarrett. Barr apologized for the tweet, alleging that she had taken the sleeping pill Ambien at the time she sent it. ABC didn't buy it and fired Barr. Her costar John Goodman said he was "brokenhearted" at the time.

"But I went through a period, about a month, where I was very depressed," Goodman told The Times of London. "I’m a depressive anyway, so any excuse that I can get to lower myself, I will. But that had a great deal to do with it, more than I wanted to admit.”

Goodman said he was "surprised" by Barr's tweet, but said he "knows for a fact that she’s not a racist.”

Barr insisted on the same thing in a lengthy interview with Fox News's Sean Hannity in July. She said the tweet was not racist, but political. Her message, she said, was in reference to the Iran Deal. She also got pretty personal in discussing her battles with depression and multiple-personality disorder.

The original "Roseanne" ran from 1988 to 1997. Before Barr sent that unfortunate tweet in May, her rebooted show had received some stellar ratings and reviews.

"The Conners" will debut on ABC in the fall.