Zamaswazi Dlamini-Mandela
|
Posted: Nov 20, 2020 12:01 AM
Share   Tweet
The opinions expressed by columnists are their own and do not necessarily represent the views of Townhall.com. 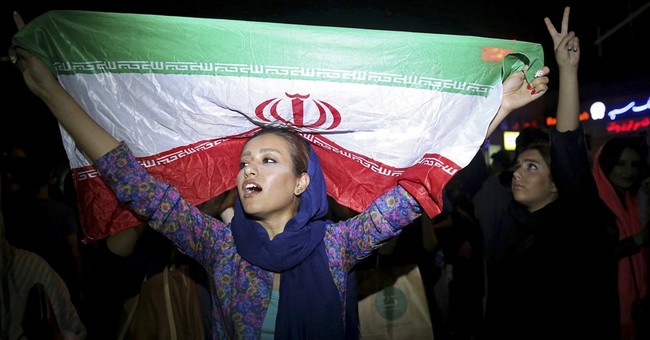 My grandfather, Nelson Mandela, once said: “Since my release, I have become more convinced than ever that the real makers of history are the ordinary men and women of our country.”

This month, the ordinary men and women of Iran are commemorating the mass killings that tragically occurred in their country in November 2019. Almost a year ago, after two days of nationwide anti-government protests against the tripling of gasoline prices across Iran, security forces responded by opening fire on demonstrators. At least 4,000 people were injured and 1,500 killed – 400 of whom were women and 29 were children. The protestors were unarmed and largely unemployed or low-income youth.

The horrifying crisis that the people of Iran have had to endure reminds me of my grandparents' struggle during the apartheid era in South Africa. My grandparents, Winnie and Nelson Mandela, alongside many other heroes sacrificed their lives, families and liberties in seeking freedom and justice. In fighting for democracy and equality, they were labelled terrorists and imprisoned. My grandfather was imprisoned for 27 years and my grandmother 491 days, most of which were in solitary confinement.

Today, thousands of political dissidents in Iran are languishing in prisons. The regime's unlawful killings in November 2019 were followed by the arrest, detention and torture of 12,000 protestors, and their families. In a cruel continuation of brutality, even family members that held memorials for their murdered loved ones were arrested.

Unfortunately, these merciless acts of systematic repression have been ongoing. People are continuing to be subjected to brutal force, disappearances, arbitrarily detentions, sexual assault and torture.

The Iranian people are in need of peace, justice, political freedom and prosperity. Now is the time to act against the many crimes against humanity that have become normalized in Iran. The people of Iran demand a regime change and reject all forms of dictatorships: both the monarchist dictatorship of the Shah and the current theocratic regime.

They demand and deserve a republic based on democratic elections, gender equality, separation of religion and state, freedom of thought and expression, as well as an end to discrimination against religious beliefs.

My grandmother Winnie Mandela was detained under the Terrorism Act - a piece of apartheid legislation designed for the security police to hold and interrogate people for as long as they wanted, and through whatever means necessary. However, the anti-apartheid regime was unable to diminish the dignity and dream of an equal future of millions of South Africans.

In protest against South Africa's system of apartheid, disinvestment in South Africa was advocated as well as boycotts and sanctions implemented by the international community.

Similar to South Africa, the people of Iran have turned to the international community to boycott the regime and to not engage in actions that legitimize commercial and political relation with the oppressive regime.

The National Council of Resistance of Iran (NCRI), led by its President-elect Mrs. Maryam Rajavi, is the Iranian people’s opposition to the current regime. It is a four-decade-old coalition of democratic forces that have persevered against the mullahs' fascism.

One of the members of the coalition is the Mujahedin-e Khalq (MEK). Over the past 40 years, the regime has executed 120,000 people for political reasons, most of whom were proud members of the MEK.

Mrs. Rajavi advocates a Ten-point-Plan for the future of Iran. This impressive plan affirms the people’s sovereignty in a republic founded on universal suffrage and pluralism; supports social, religious and political freedoms; seeks justice for those massacred and prohibits torture and the death penalty; ensures gender equality; pursues the independence of the judiciary; implores equal opportunities within a free market economy; and provides for a non-nuclear Iran as well as the protection of the environment.

This is our time to demonstrate and spread the African philosophy of “Ubuntu” which means “I am because we are”. Each of us is responsible to stand up and stand together with the people of Iran in their fight against oppression, dictatorship, injustices and inequalities.

As we remember the martyrs of the November 2019 demonstrations, we must remember that there is no easy walk to freedom. Let us stand together in solidarity and compassion and support Mrs. Rajavi’s plan for the future of Iran.

The regime ruling Iran must be held to account by world governments and the United Nations for its heinous crimes against humanity. Now is not the time for silence and inaction – we must forge a way forward together and to find a collective voice against Iran’s regime - for the freedom and prosperity of this generation and the next.