Young Voices Contributors
|
Posted: Jun 13, 2018 12:01 AM
Share   Tweet
The opinions expressed by columnists are their own and do not necessarily represent the views of Townhall.com. 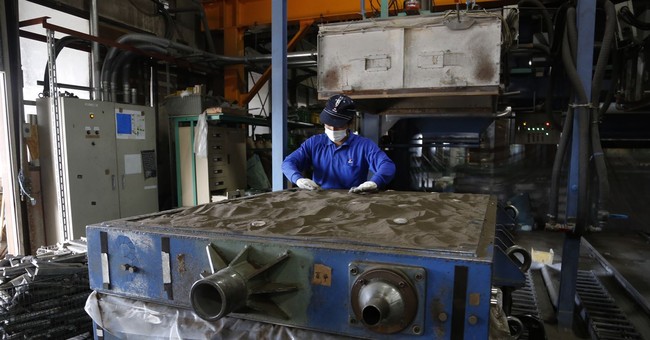 On Thursday, May 31, President Trump decided to impose tariffs on imported steel and aluminum. Currently, Canada, Mexico and European Union are contemplating retaliatory measures in response. However the negotiations with allied countries pan out going forward; a prolonged trade war will most likely come with bitter connotations of stifled job creation for the American worker and higher prices for the regular consumer.

The Trump administration first imposed a 25 percent tariff on steel and a 10 percent tariff on aluminum back in March 2018, while providing temporary exemptions to its closest allies shortly thereafter. Now that these tariffs have actually come into effect, many trade partners, including the European Union, are contemplating retaliatory measures.

Salvaging foreign relations with long-standing allies is important. But there is something else the administration should be worrying about: the American economy. The imposed tariffs – intended to equalize the trade balances and bolster the American steel and aluminum industries – have the potential to harm the rest of the economy. Adam Smith shows, in Wealth of Nations, that, contrary to conventional wisdom that the balance of trade is a metric to identify winners and losers, forced trade barriers “may be…disadvantageous to the country in whose favor it is meant to be established.”

“[R]ising steel and aluminum prices have already driven the annual cost of [the] company’s key products by $300,000, jeopardizing plans to add 14 jobs to [its] 74-employee staff,” says Troy Roberts, CEO of Qualtek, a Colorado-based company that produces steel and aluminum for aerospace and medical use.

In a press conference organized on May 3, by the National Tax Union (NTU), Sherman Robinson, Senior Fellow at the Peterson Institute for International Economics, concluded that tariffs threaten to disturb the global supply chains, increasing costs of inputs. This, in turn, would mean that fewer workers will be hired by local companies that use steel and aluminum in their production processes.

“[W]hatever gains there are in primary metals employment will be offset by job losses in downstream industries,” Paul Krugman writes in the New York Times.

Could it be that the president is just taking a page out of The Art of the Deal, with an eye on reverting these tariffs back later? One could certainly hope so, given that the President has recently pitched a ‘tariff-free’ trade zone to G-7 allies. But what if he’s not?

Global supply chains are getting increasingly complex and most companies can’t meaningfully quantify the risks associated with a full-fledged trade war yet. But it’s very likely that some, if not all, of these additional costs would be absorbed by less hiring, while others will be passed down to the regular consumers through higher prices. Many items might get more expensive, from aluminum foil and razor blades to sports equipment and cars. Toyota said on Friday, March 2, that tariffs “would substantially raise costs and therefore prices of cars and trucks sold in America.” The jacked-up price tags would yet be another kink, undermining price as a metric for product quality.

Construction industry also stands to lose. “These dramatic price increases are directly attributable to the lumber tariffs, which act as a tax on American renters and homeowners, harming housing affordability as well as impeding job creation and economic growth,” says Robert Dietz, Chief Economist for the National Association of Home Builders, who also spoke at the NTU event. By some estimates, nearly 30,000 construction jobs could be on the line, while housing shortage aggravated after the 2007-08 crisis.

In short, there are plenty of reasons to refrain from trade wars. Analysis by Phil Levy, a Senior Economist on former President Bush’s Council of Economic Advisers, shows that shrinking trade deficits with other countries, given the historically low unemployment levels, would fail to create more jobs. And believing otherwise would be a broad misconception about the contemporary economic realities. What is real, however, is the fact that the U.S. economy could be benefiting to the tune of $2.1 trillion every year from trade expansion.

With 3.8 percent unemployment rate, the lowest in 18 years, and the Consumer Confidence Index in its prime, strengthening the president’s previous achievements and fostering economic freedoms would be better served by removing trade barriers, not imposing more of them.

Anil Niraula is a Young Voices advocate and a policy analyst who writes on labor, public pension, tax, and economic policies.