Young Voices Advocates
|
Posted: Aug 11, 2017 12:01 AM
Share   Tweet
The opinions expressed by columnists are their own and do not necessarily represent the views of Townhall.com. 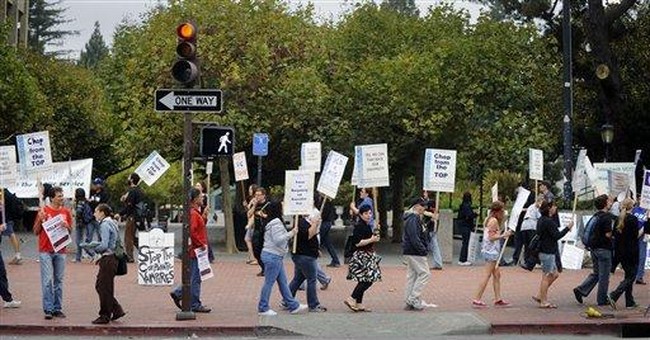 Editors Note: This column was written by Chris Machold.

North Carolina has just passed, with broad bipartisan support, a piece of legislation designed to protect and enshrine free speech on college campuses. The bill was pushed by The Foundation for Individual Rights in Education (FIRE) and the Goldwater Institute, and free speech advocates on the right are cheering the impending victories for free speech on campuses. While states like Colorado, Tennessee and Virginia have already passed a number of laws designed to protect free speech on public campuses, more liberal states like Illinois and California may also consider similar legislation.

Policies that promote the free exchange of ideas, and the legal protection of those whose speech would otherwise be suppressed by the state should be applauded. And, as conservative commentator Stanley Kurtz notes, there is much to admire about the bipartisan bill to enshrine free speech at public colleges and universities in North Carolina. But good and unobtrusive public policy, especially where it is meant to protect rights, has to be crafted in a way that balances the rights of competing interests. The free speech bills, modeled to various degrees on a proposal by Kurtz and the Goldwater Institute, are promising, but have to be carefully implemented, otherwise they might end up curtailing the rights of those who organize and protest on campus.

But first, the good: bills like Arizona’s and North Carolina’s successfully ban so-called “free speech zones,” provisions designed to contain protests which were used during the Vietnam War era to control anti-war protestors. The same provisions had been used at places like Los Angeles Pierce College to curb peaceful advocacy. FIRE also notes that the North Carolina bill (and those like it) protect faculty and staff from having to publicly agree with policies or face administrative retribution. These provisions are good and necessary for state universities which, as government-funded and operated institutions, are bound by the constitution in a way private schools are not.

But the North Carolina bill, like the Goldwater Institute proposal it is based on, also prescribes some responsibility to the school to “create a range of sanctions for any person under its jurisdiction who substantially disrupts the functioning of the constituent institution or substantially interferes with the protected free expression rights of others.”

The North Carolina bill does have some differences from other pieces of free speech legislation on the subject of these sanctions, namely (as FIRE describes) that it does not prescribe mandatory minimum punishments for those that disrupt events. Appropriately, that allows colleges to make a distinction between those who shout and jeer during speeches and those who physically threaten or injure speakers or cause damage to school grounds.

Free speech advocates rightly argue that laws designed to restrict speech allow the government––and government entities like state schools––to pick winners and losers, who will be given a voice and who will be silenced. The proposed legislation seeks to remedy that discrepancy by ensuring that the institution cannot take sides. It does so by making schools affirm free expression publically and from the top down, empowers a person whose rights are violated to seek legal recourse, and protects faculty members and students who would otherwise be intimidated by bureaucracy or a mob.

Hopefully, the university systems affected also strongly protect the due-process rights of students accused of disrupting events. The Kurtz proposal promises as much. But provisions that criminalize peaceful resistance can also lead to the government picking winners and losers. In the case of Vietnam protesters, it was conservative administrations who censored and restricted mostly center-left and far-left students.

Take the Berkeley protesters as an example. Yes, some students and outsiders chose to dress in black masks and cause damage to property, threaten other students, and make it impossible for the event to proceed. But most students were there peacefully and were only disruptive insofar as they were using their voices, numbers and signs to make their opinion known. As journalist Liz Wolfe wrote for Reason regarding Claremont McKenna (a private college), students who use “illiberal” tactics of violence and intimidation to make events impossible should face administrative consequences.

But students using their voices and presence to protest reprehensible speech are participating in the same right to free expression as speakers like Ben Shapiro and Ann Coulter. It is important to ensure that legislators and administrators do not overcorrect in the direction of free speech and end up suppressing students on the other end.

All it takes is one excessive move by an administration to cross that line and punish the loud but legal dissent of leftist students who have as strong a claim to the First Amendment as the conservative students rightly cheering new protections. The bills pushed by Kurtz and the Goldwater Institute should be met with optimism. However, as those who cherish a free society know, new laws always comes with a risk of malpractice and abuse.

In short, the new laws are forces for good. But free speech advocates will all need to watch how liberally and neutrally they are implemented, lest they be utilized to suppress political speech rather than liberate it.