Ukraine Reminds Us That Founding Israel Was Essential

Yael Eckstein
|
Posted: May 04, 2022 12:01 AM
Share   Tweet
The opinions expressed by columnists are their own and do not necessarily represent the views of Townhall.com. 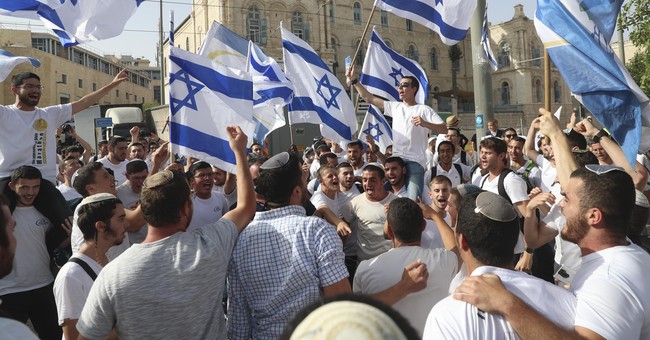 Alla Oleshko, an 86-year-old Jewish woman living in Kharkiv, Ukraine, remembers when the bombs began to fall. The Russians were aiming for the TV tower right in front of her house.

“The first time, only the windows of the house blew out. The second time, the front door was demolished by a blast,” Oleshko told us. She lost both of her legs a few years ago, making it difficult to escape to a shelter.

This is not the first time, however, that Oleshko has found herself in the middle of a war. She lived through the terrible siege of Leningrad during World War II and recalls how the Nazis bombed the city. Her father died shortly after fighting on the frontlines, and her little brother got hypothermia during their evacuation and died.

“I survived the Holocaust when I was a child, and here again the war came to my door,” Oleshko says.

Sadly, her story is not unique. The team from my organization, the International Fellowship of Christians and Jews, which is currently on the ground in Ukraine, has heard many similar heartbreaking stories from Jews in the country. These stories remind us that many are suffering all over again and are looking for a place of refuge – and are finding it in Israel.

As I write this, Israel is preparing to celebrate its 74th birthday. Yom HaAtzmaut — Israel’s Independence Day — begins sundown on May 4 and ends on the evening of May 5. In some ways our celebrations look like those in America on July 4: we gather in parks, enjoy fireworks at night, and grill out (though the fare is usually kebabs instead of hamburgers and hot dogs).

Of course, we reflect on our remarkable history as a modern democracy — in the Middle East, of all places. We reflect on how many paid the highest cost to ensure our freedom (a fact that we recognize just a day prior on Yom HaZikaron, Israel Memorial Day). Independence Day in Israel is a day both to celebrate our political achievements and a deeply spiritual day when we reflect on God’s promises and thank Him for His endless mercy.

Many recognized the establishment of the modern state of Israel as an act of God. For millennia the Jewish people yearned to return to their ancestral homeland. So on Independence Day we sing not just our national anthem but also traditional psalms of praise recited on other Jewish holidays. Yom HaAtzmaut commemorates biblical history as much as political history — our return from spiritual exile as well as physical exile.

Israel’s Declaration of Independence made it clear that the doors of Israel would always be open to all Jews. The fathers of our nation wrote, “We appeal to the Jewish people throughout the Diaspora to rally round the Jews of Eretz-Israel in the tasks of immigration and upbuilding and to stand by them in the great struggle for the realization of the age-old dream - the redemption of Israel.”

As I watch the events unfolding in Ukraine I wonder if Israel’s founders knew that their appeal would be repeated over and over again throughout history. And that, time and again, Jews from every corner of the world would respond to it.

I’m proud to say that The Fellowship has been a leader in promoting and funding aliyah (immigration to Israel) for many years – and we’ve been able to do so because of the generosity of Christians who love Israel and the Jewish people and give sacrificially to support them. Right now, with the help of these generous friends, organizations continue to help thousands of Jews make aliyah, fulfilling the vision of the biblical prophets and Israel’s founding fathers.

Alla Oleshko was recently one of those who returned to her biblical homeland. “What’s happening here is like some kind of miracle,” she said shortly before her flight to Tel Aviv. It was in fact the first time she was coming to Israel.

“I survived these two wars — World War II and this war in Ukraine,” she says. “I am happy I am alive. I continue to believe in miracles.”

Israel’s independence is a miracle that’s blessing Jews fleeing Ukraine at this very moment. I’m confident it will continue to be a blessing for people around the world for generations to come.