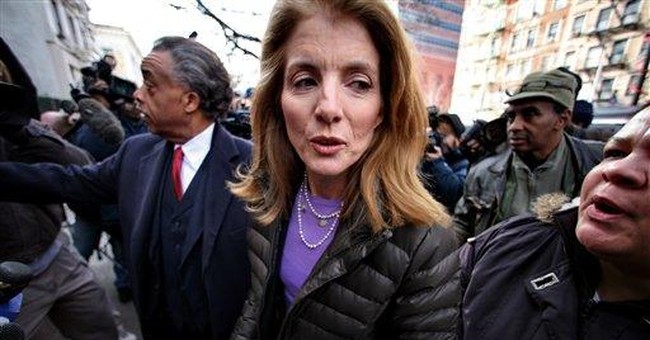 President-elect Obama's designation of Sen. Hillary Clinton, D-N.Y., as his intended secretary of state creates a vacancy in her Senate seat, which New York Gov. David A. Paterson must now fill by an appointment that will last through 2010. Caroline Kennedy, the daughter of the late President John F. Kennedy, has indicated that she aspires to the job.

In a way, her aspiration is natural enough. Her father held a Senate seat, and so (later) did her uncle, the late Robert Kennedy (in New York). New Yorkers are certainly accustomed to having a Kennedy in a high-level position. But that hardly answers the question whether Ms. Kennedy is qualified for it.

She has never held an elected political position in her life, and therefore has no record by which her positions on critical issues, or her innate political skills, can be judged. She is a serious candidate for the position solely by virtue of her membership in the Kennedy family, which has been providing the country with political leaders for a long time. And that raises the question whether such membership is, in and of itself, a sufficient qualification.

America has a long history of drawing leaders from prominent political families. From the Adamses through the Roosevelts, and on down to the Kennedys and the Bushes, being a member of such a family has always been a useful stepping-stone to political office.

It isn't hard to see why. For one thing, we tend -- usually rightly -- to assume that being a member of a family whose politics are already well known gives us some insight into how the member in question will behave politically, if elected.

For another -- and probably more important -- a political candidate doesn't exist in a vacuum. He is almost always the product of a group of people (call it a "cabal," if you wish) who have been backing various allies of the candidate, most definitely including members of his family, over the years, and who are therefore inclined in his favor from the start. If you have long been a friend and ally of a particular senator, you are going to be understandably predisposed in favor of his wife, or son, or some other relative or crony, if a time comes when he must be replaced.

But does it follow that such a predisposition is justified if the proposed successor has no personal record by which his or her qualifications can be judged? On all the evidence, Caroline Kennedy is a charming lady, but what do we know about how she is likely to behave as a U.S. senator? That is why a record as a member of the House of Representatives, or at least as a holder of some other public office, is such a useful datum in judging the qualifications of a person to serve in the Senate.

Hillary Clinton, whom Ms. Kennedy proposes to succeed, was far better known. She had been an active political ally of her husband's throughout his eight years in the White House, and her views on major issues -- not to mention her own service in various governmental positions -- were thoroughly familiar to the American people. By contrast, Ms. Kennedy's record is, quite simply, a blank sheet of paper.

I do not think it is unreasonable, therefore, to conclude that Ms. Kennedy is simply not qualified, at this point in her career, to become one of the hundred immensely powerful people whose consent is required to every law passed by Congress, and every nomination approved by the Senate. In appointing her, Gov. Paterson would be gambling on her presumed identification with the political records of her father and brother, not to mention her possession of political skills that there is simply no evidence that she has.

Ms. Kennedy comes from a family with formidable political gifts, and these may well reside in her genes, too. But Governor Paterson ought not to ask the people of New York to take that endowment on faith.