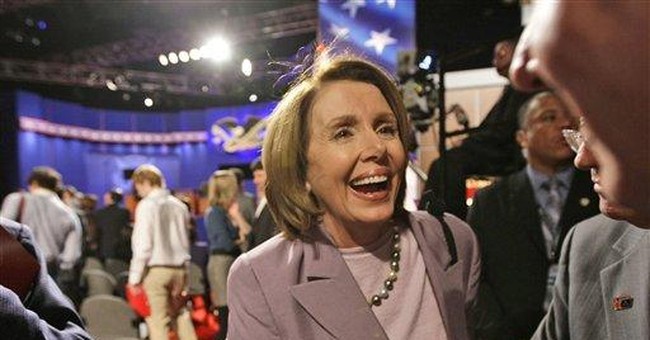 It was probably inevitable. In small doses, it may even be desirable. Never mind that the economic crisis we face isn't nationwide, but worldwide, with causes that are beyond the power of any one nation, even this one, to remedy. The federal government must, of course, take what steps it can to correct matters and keep the damage within bounds.

But it was easy to predict that the Big Government boys would leap on the situation to call for their favorite remedy. "CRISIS INSPIRES RETHINKING OF 'REAGANOMICS,'" blared the top headline in Oct. 19 San Francisco Chronicle. And the subhead followed suit: "Experts say era of small government, deregulation is over."

Yep, it turns out the Gipper was wrong. As the article's first sentence puts it, "Big government is staging a comeback." Out from under their rocks are coming all the Big Government fans who have spent the last 30 years in hiding. In the exultant words of William Galston, a senior fellow at Washington's Brookings Institution, "We've gone through a period of three decades when the default assumptions were conservative assumptions. That framework has probably been torpedoed by events." One can practically hear Galston exhaling, "At last!"

As the Chronicle article notes, "A combination of circumstances, including the resurgence of the Democratic Party and fallout from the worst financial crisis since the Great Depression, is giving impetus to wholesale expansion of government economic intervention."

And it's true. Government is climbing all over the woodwork, planning to make things better. And if, as seems likely, a Democratic administration and Congress sweep to victory next month, you can bet that the new administration will be positively crawling with fresh ideas to steer the economy in a (supposedly) more desirable direction.

But if you get the uneasy feeling that you have heard all this before, you are right. Time after time, every few years since 1934, Washington, D.C., has been trotted out as the solution to the nation's problems. But the New Dealers were still struggling to pull the country out of the Great Depression when World War II obligingly took the problem off their hands. And government has proven no wiser in the ensuing decades.

The truth is that bureaucrats have no crystal ball that can reveal the right economic course for the country. The economy has its ups and downs, based in part on global factors beyond merely national control and partly on national trends set in motion by forces sublimely indifferent to Washington's wishes. If (say) the weather dictates a downturn in agricultural production, no "czar" in Washington can command an uptick.

But the recent worldwide economic downturn will, predictably, generate a demand that Washington "do something," and Washington will respond with a whole series of programs, laws and expenditures allegedly designed to improve matters. Few, if any, of them will work, but they will have the collective effect of putting government's weight on the scales against the economy's own healthy tendency to right itself. In a few years, we will learn all over again why we acquired our previous deep distrust of government "solutions."

That is why the coming barrage of new government programs will predictably be such a desperately bad idea. We cannot legislate our way out of an economic slump, because an economic slump is simply the economy's way of exhaling, prior to taking a fresh breath. We can take palliative measures, to relieve individual cases of economic discomfort, but we cannot repeal the laws of economics.